Cardinal Carlyle seek up to €110m for Payzone 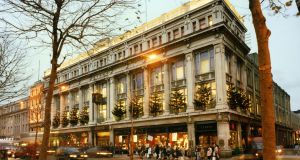 US property fund Thor Equities is seen bidding for the former Clerys department store on O’Connell Street in Dublin, according to a report in the Sunday Times.

Cardinal Carlyle Ireland has put electronic payments company Payzone on the market with a price tag of between €90 million and €110 million, according to the Sunday Independent.

The newspaper said that the sale is believed to have been triggered after Cardinal Carlyle Ireland, which bought Payzone in 2015 for €39 million, received an unsolicited approach for the business. International corporate finance company Arma Partners is advising on the sale.

The Sunday Independent also reports that Eir, which was recently taken control of by two firms that are majority-owned by French businessman Xavier Niel, has stopped using media-buying agencies to plan and buy all its advertising.

The cost-cutting initiative comes after Eir revealed in April, weeks after its takeover was completed, that it planned to cut 750 jobs as part of a wide-ranging cost-cutting plan.

US property fund Thor Equities is seen bidding for the former Clerys department store on O’Connell Street in Dublin, according to a report in the Sunday Times.

Natrium, which acquired the property under controversial circumstances three years ago for €29 million., is currently marketing the investment through Knight Frank at a guide price of €61.4 million. Representatives from Swedish furniture retailer Ikea also visited the Clery’s site recently.

Beef magnate Larry Goodman has increased his interest in the Blackrock Clinic in south Co Dublin to 36 per cent, after buying an additional 8 per cent stake, according to the Sunday Times.

The 8 per cent holding was previously owned by property developer and investor John Flynn. The stake was advertised for sale earlier this year by a liquidator after a Goodman company acquired a Flynn debt that was secured against the shares, the newspaper said.

Mr Goodman is the largest individual shareholder in the private healthcare clinic, which posted €12.5 million of profits in 2016 on turnover of €119 million.

One of the largest shareholders in C&C has generated €30 million for the sale last week of some of its stake in the cider and beer manufacturer, the Sunday Business Post reported.

Southeastern Concentrated Value, a fund backed by Egyptian tycoon Nassef Sawirls and partners at the US firm Southeastern Asset Management, has reduced its stake in the Dublin-listed company to 13.2 pe cent from 16.5 per cent as a result.

Businessman Michael Smurfit has told the Sunday Business Post that he is “very sad” to be selling the K-Club golf resort in Co Kildare, which is said to be worth between €70 million and €200 million.

“We have decided to do this because of my advancing years,” Mr Smurfit (81) is quoted as saying. Mr Smurfit bought out his co-owner of the club, developer Gerry Gannon, for about €40 million after the property crash.