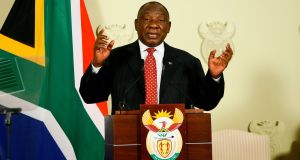 The package Mr Ramaphosa presented at a press conference in Pretoria on Friday places an investment focus on agriculture, townships and rural economies, and outlines policy reforms for a number of sectors designed to boost economic growth and create jobs.

South Africa’s economy officially went into recession earlier this year after the country’s real gross domestic product decreased by 0.7 per cent in the second quarter of the year. That followed a 2.2 per cent contraction in the first quarter.

Reflecting on the recession, Mr Ramaphosa said that 400 billion rand would be allocated to the new South Africa Infrastructure Fund, an initiative that will fundamentally transform government’s approach to the rollout, building and implementation of infrastructure projects.

“We will identify and quantify projects, like roads and dams, and engage the private sector to support the activities,” he said, before adding that three regional and 26 township industrial parks had also been prioritised for revitalisation.

The money needed to support the stimulus package will not be borrowed, according to Mr Ramaphosa, but reprioritised from the country’s existing three-year budget cycle. This year alone 50 billion rand will be redirected from February’s budget.

Mr Ramaphosa also announced that policy changes will be made in the tourism and mineral resources sectors in a bid to create certainty for international investors spooked by the previous administration’s inability to create an enabling environment in these areas.

For instance, South Africa’s difficult visa regime will be reconsidered, including a revision of which countries’ citizens will need visas to enter in the hope that it will help tourism to grow and create employment.

In addition, controversial legislation like the Minerals and Petroleum Resources Development Act, which had raised significant concerns in the industry, will be withdrawn from parliament where it is waiting ratification.

Agriculture was also identified as a major driver of economic recovery and this sector is to receive priority funding.

However, land reform is currently a hot topic in South Africa as the government grapples with how best to legislatively enable the expropriation of land without compensation in a way that agricultural output and investment is not harmed.

To help galvanise the sector and ensure sustainability, growth and food security in it, an independent 10-person advisory panel on land reform will be established, said Mr Ramaphosa.

1 Brother is dragging his heels as executor of uncle’s will - is there anything I can do?
2 Irish whiskey sales near milestone of 12m cases a year
3 Covid-19 mortgage breaks: What’s the catch?
4 Stocktake: Has Warren Buffett lost the magic touch?
5 Should my mam wait for house prices to drop before buying?
6 Man charged with stealing €31,000 from company account
7 Parts of Brown Thomas and Arnotts to reopen next week
8 Thailand attempts to lure travellers with luxurious lockdown options
9 Apple tax case: Four individual lawyers paid over €500,000 each
10 Pet product firm’s directors restricted from involvement in companies
Real news has value SUBSCRIBE