Something rotten: what has gone wrong in Japanese corporate culture? 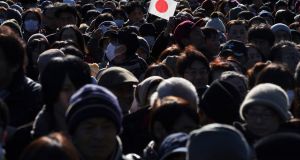 There was an assumption that everyone on the factory floor was devoted to the perfection of monozukuri, or craftsmanship. Photograph: AP

On an otherwise ordinary afternoon in mid-December, the Hakata to Tokyo express pulled into Nagoya and a thousand passengers were ordered off the train. The burning smell and unusual sound turned out to be cracks in the chassis.

It was the first time that the Shinkansen, the country’s most potent symbol of industrial power and “made in Japan” engineering quality, had succumbed to an officially designated “serious incident”. Once upon a time, the cracks would have been unthinkable; the nation - along with the outside world - has long been conditioned to think of Japanese manufacturing as beyond reproach. But after suffering a succession of different scandals, Japan’s problem is that imperfection is far less unthinkable than it used to be.

The bullet train stoppage marked the culmination of months of public admissions by some of Japan’s greatest names - including Nissan Motor, Subaru, Toray Industries, Kobe Steel and Mitsubishi Materials - that they have either been cheating on quality tests or falsifying documents to sell products of a lower quality than stated. It spawned a stampede of questions about the overall reliability of Japan Inc.

Data have been fudged on materials used in everything from Boeing aircraft and nuclear plants to space rockets and Uniqlo thermal underwear. Factories have been stripped of their Japanese Industrial Standards certifications and chief executives have felt obliged to make deep bows of apology. For an industrial economy that has built its global name on its reputation for quality, these are nerve-racking times.

No one thought that Japanese companies were intrinsically more honest than their counterparts around the world, says one former Toshiba executive, but there was an assumption both inside and outside Japan that everyone on the factory floor was devoted to the perfection of monozukuri, the craftsmanship that represents what is arguably the proudest of Japanese corporate boasts. “That assumption is what has taken the heaviest beating,” he said.

Trust in our company has fallen to zero

When Hiroya Kawasaki, the chief executive of Kobe Steel, first confessed that the company had been taking part in data falsification that dated back to the 1970s, his statement was almost apocalyptic: “Trust in our company has fallen to zero,” he said.

Veteran observers of Japan see the scandals as expressions of fundamental shifts that have until now avoided detection. “This may be the beginning of the crumbling of the organisational framework where [Japanese companies] would err on the side of quality rather than profit,” says Nicholas Benes, a consultant who helped write Japan’s 2015 corporate governance code.

Amid such dramatic prognostications, several key questions remain. Are these problems systemic, are they in any sense uniquely Japanese and why is so much suddenly coming to light now? Should blame lie on the factory floor or in the boardroom? And can this problem be solved through reform of corporate governance?

Executives, academics and seasoned analysts of Japanese corporate history say there is a strong case that these scandals are all symptoms of ailments common to large swaths of corporate Japan. Many predict there will be more scandals to come. And, as if encouraged by the flow of big public exposés, anonymous online chat rooms are abuzz with allegations from staff of similar internal control failures and fraudulence at companies across Japan.

To deepen the sense of conspiracy, companies that have admitted to fraudulence and cheating also say it has existed for years, and in some cases decades. Hard-to-explain realities abound. The scandals imply, experts say, an institutionalised willingness to break regulations within institutions that specifically pride themselves on being uncompromising sticklers for rules.

Nobuyuki Idei, one of the country’s best known industrialists and a former chairman of Sony, shrugs and agrees that the scandals have raised many more questions than they have answered. “What is quite clear is that responsibility for quality is a management issue...particularly when the ‘made in Japan’ reputation relies on quality. We need a situation where the chief quality officer is as important [among a company’s senior executives] as a chief financial officer. But we are not there yet.”

While some are keen to frame these scandals as isolated cases and play down the idea that this is a national crisis, several of the country’s most prominent politicians have openly said otherwise. Yoshihide Suga, the chief cabinet secretary, said in early December that the most recent scandal at Toray Industries was “shaking the foundation of fair trading”. Keiichi Ishii, minister for land, infrastructure, transport and tourism, said at the time of Nissan’s inspection scandal that it was “causing anxiety for drivers and shaking the very foundation of the vehicle certification system”.

Sadayuki Sakakibara, chairman of the Keidanren business federation and Toray’s chief senior adviser, described the quality control failures that had come to light as “a grave situation that has the potential to erode international trust, as well as the trust of the Japanese public, in Japanese companies”.

Nobuo Gohara, who heads Japan’s leading compliance consultancy, is quite certain that more scandals are waiting to emerge - largely because he conducts surveys at the request of some of Japan’s largest companies specifically wanting to root them out before they reach the public domain.

“We send a survey round to everyone and we hide in it the question: ‘Is there something going on around you at work that you would not want to come to light?’” says Mr Gohara. “That question has the most amazing effect. You would not believe what they tell us.”

Japan is no stranger to reputational meltdowns. Between 2012 and 2015, the optical products maker Olympus, the airbag maker Takata and then the conglomerate Toshiba suffered scandals ranging from company-wide accounting fraud to a massive safety cover-up involving multiple fatalities.

On paper at least, the recent spate of scandals appears less serious. Although hundreds of products were affected, no safety issues have yet arisen from goods that were sold by Kobe Steel, Toray and others; Nissan and Subaru cars shipped without the stamp of a fully certified inspector all exceeded international standards. Even at the purely commercial level, the crises seem manageable: in the case of manufacturers that have been falsifying product quality data, the shipments represent fractions of 1 per cent of annual sales within one company division.

Something fundamental seems to have broken in these organisations

But the question of why the fraudulence is happening remains pivotal. Some suspect it is the result of intensified pressure to produce profits. When Toray revealed data falsification on tyre material, Akihiro Nikkaku, its president, chief executive and chief operating officer, linked the issue to “pressure to meet productivity targets”.

Mr Benes says many companies appear to have relented on quality rather than find ways to lower costs or abandon non-profitable products. “A lot of people are wondering whether these companies have head offices that are too far from production centres, and are too administrative and simplistic in the way they react to intensifying profit pressure from other competitors in the world,” he says. “Something fundamental seems to have broken in these organisations.”

But not everyone agrees. “These companies have cut some corners and the business associations often say it is because they have excess pressures on them. Really?” says Nicholas Smith, a Tokyo strategist for brokerage CLSA. “There aren’t enough pressures on them: most haven’t ever made a return on equity. I would say people have been unbelievably patient with low returns from Japanese companies.”

Others see the falsification as a response to onerous quality regulations imposed by what one steelmaking company executive describes as “an unrealistic, out-of-touch and overly conservative trade ministry”. A third possibility is that it is a symptom of the skewed power relationships within the customer-supplier hierarchies that underpin Japan’s industrial base.

These problems can be found anywhere in the world, says Takahiro Fujimoto, head of Tokyo University’s Graduate School for Management. “If the product specifications being asked for were excessive, Kobe should have negotiated with the customer companies to change, as long as they could give assurances that the quality was high enough even after the downgrade,” he says. “But that didn’t happen because of the way power works here. What is uniquely Japanese in this? The B2B customer is God.”

Mr Fujimoto does not believe that the scandals can be used to demonstrate a decline in the quality of Japanese manufacturing: the sheer length of time they have been going on, he argues, would have brought such a decline to light in the form of routinely failing products.

Nevertheless, he says, there is clearly a systemic issue with a wider corporate culture that has allowed rule violation to become the norm. The small, highly specialist groups of engineers who work with quality control are used to keeping technical secrets and are in many ways in the perfect locus for creating rule-breaking solutions to the many challenges - including regulation and profit targets - that they face.

What these scandals tell us is that there is a network of unintended consequences. It makes you think that it is all the plan of a big clever guy. It’s not.

“What these scandals tell us is that there is a network of unintended consequences. It makes you think that it is all the plan of a big clever guy. It’s not. It’s all small guys with small motivations,” says Mr Fujimoto.

That thesis ties neatly, say other experts, with the question of why so many scandals are emerging now. Governance reform, where revealing bad practice has become more acceptable, and a social media sphere that has become a forum for whistleblowing from the factory floor have created an environment perfect for airing such grievances. Changes in the domestic labour market play an important part too: factories are increasingly filled with contract workers with fewer qualms about calling out poor practices.

Mr Gohara, the compliance consultant, says these scandals are emerging now because social media has mounted an epic challenge to the “fuzziness” of Japanese society - a kind of unspoken decision to say, ‘let’s not have a problem, let’s just keep quiet about it’.

The routine falsification of data by companies clashes with their employees’ natural instincts to play by the rules. “They hate it. They hate breaking the rules, and as the regulations get tighter, they hate lying on ever more serious looking forms,” says Mr Gohara.

But even if that reality is well understood within companies, infusing the day-to-day running of enterprises, the constraints and distortions it implies are rarely discussed in the open.

Kazuo Ichijo, dean at the Graduate School of International Corporate Strategy at Hitotsubashi University, says there is still “something mysterious” for many outsiders about corporate Japan because of “their lack of transparency and effective communication”.

“Japanese executives are so poor at communicating everything about their companies,” he says. “They do not explain what they are doing, they do not communicate their operations, their philosophy.”