Ireland to lead EU states back into bond markets in 2018 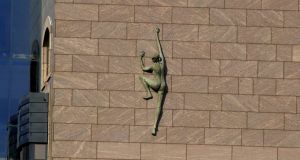 Ireland is set to be the first European Union sovereign to dip its toe in the bond markets in 2018, as the state’s debt agency hired a number of banks and securities firms to market up to €4 billion of bonds.

The National Treasury Management Agency (NTMA) has mandated Citigroup, Danske Bank, Davy in Dublin, JP Morgan, Morgan Stanley and Nomura to sell the benchmark 10-year bonds on its behalf, saying that the deal “is expected to be launched and priced in the near future, subject to market conditions”.

It is believed that the NTMA plans to carry out the transaction on Wednesday, in line with its strategy over the past four years of being among the first European states to tap bond markets at the start of the new year.

The NTMA did not say how much it planned to raise. However, market sources put the deal at between €3 billion and €4 billion and said that the bonds will be likely to price to carry a coupon, or interest rate, of about 0.9 per cent.

This would put the agency well on its way to delivering on its full-year target of raising between €14 billion and €18 billion in the bond market.

While the Government aims to deliver a balanced budget this year for the first time since before the financial crisis erupted in 2008, the NTMA faces €24.2 billion of debt refinancing between 2018 and 2019, with a further €18.5 billion of bonds due to mature in 2020.

The NTMA sold €15.75 billion of benchmark bonds last year, including the sale of €4 billion of five-year bonds in October at a yield – or market interest rate – below zero, to help finance the early repayment of troika bailout loans. These comprised €4.5 billion of remaining aid from the International Monetary Fund and €1 billion owed to Sweden and Denmark.

The State continues to owe €40.9 billion to two European Union funds and the equivalent of €4 billion to the UK as a result of its international bailout, secured in 2010.