Services sector described as ‘forgotten child’ of the Brexit process 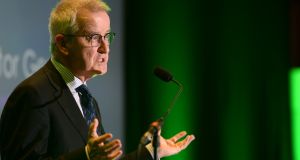 British Irish Chamber of Commerce director general John McGrane: he launched a framework document which makes key recommendations on how trade in services between the EU and UK could be preserved post-Brexit. Photograph: Dara Mac Donaill

Brexit could jeopardise €46 billion in services trade between the Republic and the UK, the British Irish Chamber of Commerce has warned.

Director general John McGrane described the services sector, which includes businesses as diverse as retailers, legal practices and banks, as “the forgotten child” of the Brexit process given the overwhelming focus so far on goods.

He also warned that a comprehensive free trade deal covering services, something that has never been achieved anywhere else in the world, could take five years to negotiate even with both sides starting from a point of regulatory alignment.

UK prime minister Boris Johnson has set a deadline of December 2020 to reach a new trade deal with the EU, giving negotiators just 11 months from his January 31st exit date to seal an accord.

Mr McGrane was speaking at the launch of a framework document by the chamber which makes a number of key recommendations on how trade in services between the UK and the EU could be preserved post-Brexit.

It noted that bilateral trade in services between the Republic and the UK was worth €46 billion in 2018, €10 billion more than the trade in goods between the two countries.

As a starting point the document calls on both sides to agree to stay closely aligned on a regulatory basis to allow for ongoing trade in sectors such as financial services.

It also recommends the mutual recognition of qualifications to allow market access for professional services, a key plank of the services sector.

It suggests a visa waiver programme, over and above any future migration rules, could be established for people engaged in services-related business activity.

The deal should also cover services that are integrated into the production of certain goods, such as maintenance contracts.

It also suggests the negotiations should be conducted on a “negative listings” basis with the provisions of any agreement applying to all services, even to sensitive areas such as broadcasting and government procurement, unless they are specifically exempted.

“It’s better to have a good deal rather than a quick deal,” the chamber’s head of Brexit policy Katie Daughen said. “So we remain of the view that the option to extend the transition period should remain on the table in the interests of getting the best deal possible.”

Ms Daughen noted that the Republic had a €10 billion trade surplus in services with the UK compared to a €3.8 billion deficit when it came to goods.

While noting the potential complexities of negotiating a comprehensive deal for services and the limited timeframe currently being proposed, Mr McGrane said there was no reason why the EU and the UK should not “jointly aspire” to forging such a deal.

“Both parties have spoken of their desire to agree an ambitious and comprehensive deal on trade and investment in services, and this paper offers a roadmap to achieve that vision.”

While Mr Johnson’s recent electoral triumph led to optimism that he would end the long-running Brexit stalemate, it virtually ensures the UK will leave the EU on January 31st before entering into a potentially tricky free-trade negotiation with Brussels.