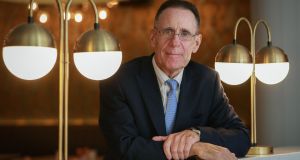 The group also entered the Dublin market last year with the opening of its €50 million 234-bedroom Hyatt Centric hotel at the Coombe near St Patrick’s Cathedral. The new hotel provided the group with a 47 per cent increase in rooms, from 495 to 729. Its Hodson Bay hotel has 175 rooms, with 167 at the Sheraton and 153 at the Galway Bay hotel.

Managing director Padraig Sugrue said: “Group average room rate increased by €2 to €102, with average occupancy increasing by 1.5 per cent to 75.5 per cent.”

On the opening of the Hyatt Centric in Dublin, Mr Sugrue said: “It will be well into 2020 before we have any real information regarding its performance. However ,we are very confident about its future as Hyatt hotels are a major international brand with over 20 million loyalty customers..

1 Should AIB compensate me for upsetting letter on arrears?
2 Irish economy to grow by 3.4% this year, predicts EY
3 Poll on second election, concerns over Irish pension gap, and Ireland’s rich list
4 Don’t buy online DNA ancestry tests. You are the real product
5 Don’t die before you read this: what happens to your money if you die unexpectedly?
6 The Irish man making his mark on California’s cannabis industry
7 US threatens retaliation against EU over proposed carbon tax
8 How to … transfer your data to a new phone
9 Richie Boucher appointed as next chairman of CRH
10 North’s consumers will be ‘hardest hit’ if UK fails to secure EU deal
Real news has value SUBSCRIBE