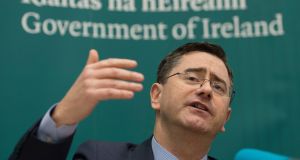 The Government’s tax take has almost doubled since the low point of the crash in 2010, according to the latest exchequer returns.

They show that the Government collected a record €59 billion in taxes last year, exceeding the 2018 performance by 6.8 per cent or €3.75 billion.

This was nearly double the €31 billion collected in 2010, underlining the turnaround in the State’s finances.

The Department of Finance said taxation receipts last year were also €1.4 billion ahead of expectations, thanks to another strong influx of corporation tax.

The business tax generated a record €10.9 billion in 2019, €1.4 billion above profile, and is now the Government’s third-largest tax category.

The strong performance will see the Government run a budgetary surplus of about €1.5 billion for 2019, which corresponds to about 0.4 per cent of GDP, up from the expected 0.2 per cent set out in October.

Department of Finance chief economist John McCarthy said the €1.5 billion surplus would be used to boost the cash balances of the State’s debt-managing agency, the National Treasury Management Agency (NTMA).

“Ultimately when it works through the system it will reduce debt from what would otherwise have been the case,” he said.

The Minister for Finance Paschal Donohoe said: “Running budgetary surpluses is the first line of defence when it comes to our over-reliance on corporation taxation receipts. In other words, ‘excess’ corporation tax receipts are not being used to finance day-to-day spending but to reduce debt.”

The Irish Fiscal Advisory Council (IFAC) has criticised the Government for using excess or potentially temporary corporation tax receipts to paper over cracks in its spending plans.

On the outlook for corporation tax, Mr McCarthy said he expected receipts to increase again this year but to begin to level off in 2021 on foot of changes to international tax rules.

The latest returns show income tax, the Government’s largest tax heading, generated just under €23 billion in line with expectations but this was nearly €1.7 billion or 8 per cent up on last year, reflecting the strong level of employment growth in the economy.

VAT, which reflects conditions in the retail sector and consumer spending generally, also came in on target at €15.1 billion for the year but was up 6 per cent or €883 million in year-on-year terms.

Non-tax revenue in the year amounted to €3.35 billion, up €443 million, helped by increased Central Bank surplus income of €2.38 billion.

During the year, gross voted spending on public services and infrastructure totalled €67.4 billion. Current spending accounted for €60 billion of that, while capital spending rose 22.5 per cent to account for €7.4 billion.

The release of the exchequer returns came just after Google parent Alphabet said it will no longer use the intellectual property licensing practice known as the “double Irish Dutch sandwich”. The tax loophole allows companies to incorporate in the Republic, while being tax-resident elsewhere. In effect, this allowed those companies to channel billions of euros of profits through the Republic and on to Irish-incorporated entities elsewhere.

Mr Donohoe told RTÉ earlier on Friday that the impact of shutting the loophole in the middle of the last decade has already fed through into our tax affairs.

“But I believe that the increases we have seen, we cannot rely on them in the future and that is why, firstly, growing the surplus that we’re announcing today is an imperative and secondly, also growing the number of people that work in the different kinds of jobs that they have will become even more important, and we have more people at work in different kinds of work, and that’s also a really important insurance policy to that kind of risk,” he said.

1 Ryanair and Eir the worst for customer service during Covid crisis
2 Tinnitus group Neuromod raises €10.5m for expansion
3 Fair deal? Family at odds with hospital and each other not so sure
4 ‘Essential’ retailers risk a firestorm if they exploit the closure of the ‘non-essential’
5 What to consider if older person or loved one needs care at home
6 PlanNet21 eyes further acquisitions after buying rival eCom
7 Glenveagh attracts growing hedge-fund interest
8 INM inspectors write to former directors in ‘inside information’ inquiry
9 Pension auto-enrolment looks unlikely in 2022
10 Level 5 restrictions risk pushing economy into double-dip recession
Real news has value SUBSCRIBE