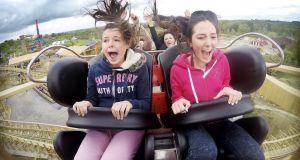 Tayto Park’s rollercoaster which opened in 2015.

Plans by Tayto Park to have its €15.5 million ‘Coaster 2021’ project operational for next year have suffered a major setback.

This follows two of the objectors, who successfully blocked businessman Raymond Coyle’s previous version of ‘Coaster 2021’ last year, lodging an objection against the new proposal with Meath County Council.

Donal Greene and Clare Smith have lodged their objections despite Mr Coyle claiming that the noise from the planned new rollercoaster will not impact on nearby residents.

“There will be screams, but they will be drowned out,” Mr Coyle said. Last July An Bord Pleanála did not grant permission for Mr Coyle’s previous rollercoaster plan over concern about the noise impact on near by residents.

The new ‘Coaster 2021’ project is made up of a 31 metre high and 748 metre long Suspended Thrill Coaster and a 24.2 metre high 238 metre long Family Boomerang ride.

Documentation lodged with the plan states if the rollercoaster doesn’t proceed “the longer-term viability of the park would be brought into question”.

The new proposal contains 14 separate noise reduction measures drawn up by Dutch roller-coaster maker Vekoma which has made roller-coasters Space Mountain and Big Thunder for Disney.

Mr Greene and Ms Smith have told the council that the planned rollercoaster “will have a serious negative long term impact on our peaceful enjoyment of our home and the protection of the natural environment”.

“We are local residents, living approximately 700 metres from the entrance to Tayto Park. We have lived in the area since 2013 and our family has been based in this area since the 1970s.”

They contend “that aside from proposals to make some noise abatement modifications to the development, the proposed new development is the same as the previous application”.

“In this regard, all of our previously stated concerns about a development of this scale and intensive nature still stand. Any modifications proposed in this application do not alter any of its substantive deficiencies, ” Mr Greene and Ms Smith said.

They contend that the grounds and reasoning behind the An Bord Pleanála decision still stand “as no amendments have been made to counter the various issues they found to exist.”

These issues include that the proposal’s close proximity to residential dwellings would injure the amenities of property in the vicinity.

The objection now sets up the prospect of the application going before An  Bord Pleanála if Meath County Council do grant the project planning permission.

Even if the project secures planning permission this Summer, any decision to appeal ends the prospect of ‘Coaster 2021’ becoming operational in 2021 as the roller coaster will take one year to construct and six months to erect.

Mr Coyle said on Tuesday that he is “disappointed” over the objection lodged.