Salvini has economists’ support in dispute over Rome’s spending 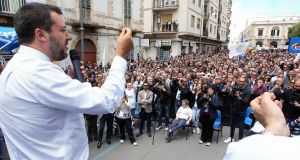 Matteo Salvini has reignited Rome’s battle with Brussels over his public spending plans, and while financial markets are unimpressed, many international economists – who often dislike his politics – believe he might be right.

The European Commission wrote to Rome on Wednesday to warn Salvini against his fresh bid to expand Italy’s budget, after the country’s deputy prime minister and leader of the anti-immigration League party called for a “fiscal shock” to boost growth.

At the annual meeting of the Bank of Italy on Friday, governor Ignazio Visco said Italy urgently needs a “credible” strategy to cut a public debt load that risks imposing a “severe constraint” on the economy.

The ratio of debt to economic output may exceed the levels targeted by the government in its latest plan, said Visco, who is also a member of the European Central Bank’s governing council.

“There must be no delay in defining a rigorous and credible strategy for its reduction in the medium term” including a review of spending and taxes, he said. Visco’s call for greater budget discipline comes as the European Commission is also pressuring the Rome government to make good on its promises to reduce the debt load.

That clashes with the view of Italy’s populist government, which favours higher spending and tax cuts to stimulate the economy and rein in the debt by boosting revenue.

The government’s current plan targets debt equal to 132.6 per cent of GDP this year and 131.3 per cent in 2020. Visco noted in his speech that the 2019 goal relies partly on a target of €18 billion in revenue from privatisations.

The commission warned earlier this month that Italy’s fiscal situation will worsen this year and next, as a slight economic pick-up is not enough to keep its debt and deficit from rising.

The nation’s structural deficit – which excludes one-time expenditures and cyclical effects and is a key figure for EU budget rules – is forecast to worsen by 0.2 of a percentage point in 2019 and 1.2 points next year, when the debt will exceed 135 per cent of economic output, according to the commission.

The government is likely to respond on Friday to a letter from the commission asking Rome to explain its failure to make good on promises to reduce the debt. Finance minister Giovanni Tria is expected to reply that tightening this year would be hard on an economy that has just emerged from a technical recession, further hindering the government’s efforts to reduce the debt load. Italy’s efforts to improve its public finances require it to contain its borrowing costs, Visco said.

But the commission’s concern is based on “nonsense” economics, according to Robin Brooks, chief economist of the orthodox Institute of International Finance, the organisation representing the world’s largest banks.

At the heart of the dispute is the concept of the “output gap”, a measure of how hot an economy is running. For any country, the output gap seeks to estimate how far the current level of economic output is above or below the level which would leave inflationary pressures stable. If actual output is significantly below potential, this implies the government has more leeway to increase spending to stimulate the economy until balance is restored.

The commission calculates that Italy’s output gap is almost zero – 0.3 per cent of national income this year, only a touch bigger than its estimate of 0.2 per cent for Germany. This implies that Italy’s economy has no more scope for additional growth than Germany’s does; therefore the commission opposes Salvini’s spending plans.

Yet Italy has much higher unemployment than Germany and Italian output per capita has fallen 2.6 per cent since 2000 while Germany’s has increased 25 per cent. Brooks said these differences were “implausibly adverse” for Italy, adding that they “strain credulity when seen in a cross-country perspective”.

The commission’s technical reasoning fails to capture Italy’s potential for additional growth properly because it reflects the economy’s poor recent performance, not what would be possible with better policies, said Brooks.

The output gap is a theoretical construct because the potential level of output cannot be calculated with certainty; as a result, concerns are growing among leading economists that these technical estimates are becoming a curse.

One high-level official who is responsible for economic estimates at a leading international body told the Financial Times that output gaps are “very sensitive” to data revisions and the current level of economic performance.

“As an economic variable used for policy, it’s very volatile,”said the official.

Olivier Blanchard, formerly chief economist at the International Monetary Fund and now at the Peterson Institute, said: “We really do not know whether Italian unemployment can go down to, say, 6 per cent. I believe it can because when it did last time, there was no inflation pressure, and I see no reason why things should have changed very much.”

Italy is heading towards a possible financial crisis

The danger, according to Adam Tooze of Columbia University, is that “politics [is being] pursued by the technical means of economics”, with the unintended effect of bolstering populist forces across Europe.

“It is a fine judgment what is the right thing [for Italy] to do, but what isn’t a fine judgment is that the European Commission shouldn’t publish nonsense,” said Tooze.

The commission does not agree. Its officials recognise the uncertainties but insist their work is fair to all countries. A senior EU official said the methodology was developed over many years by member states themselves and “is never a mechanical extrapolation of one indicator”.

“The rules themselves foresee the need for an overall assessment and some discretion to allow for an economic judgment,” said the official. “The output gap is thus only one part of the overall framework to determine fiscal requirements and all relevant factors must be taken into account.”

But rarely has the commission come under such intense fire about a technical indicator.

The stakes are high because the war over the output gap will determine how much room Italy’s populist government has for manoeuvre in the months ahead.

Some of the staunchest supporters of the Brussels line come from inside Italy. Tommaso Monacelli of Bocconi university said there was nothing strange about estimates that suggest Italy’s potential output has not changed in the past 20 years.

“Italy’s economic problem is one of [low] long-run growth,” he said, adding that the weakness stems from years of low investment, research and development and technology adoption. “It is useless to think of expansionary fiscal policy as a way to jump-start the Italian economy,” he said.

Salvini’s fiscal ambitions do receive support from some businesses. Angelica Donati, an executive in her family-owned construction company based in Rome, welcomed the government’s bid to relax public investment rules which “have effectively paralysed activity across Italy”.

However, that risks Italy being seen as willing to countenance corruption and poor procurement decisions, undermining markets’ confidence – a potentially substantial problem given Rome’s need to woo investors who hold Italy’s mountainous levels of public debt.

Monacelli predicts the ruling coalition’s fiscal expansionism will lead to trouble ahead. “Italy is heading towards a possible financial crisis,” he said. “The key issue is really not about the decimal points of the Italian output gap, but much more fundamentally about the credibility of its government.”

On that, Blanchard agrees. “They have to be smart about what and how they spend so as to avoid investors having a hissy fit. They are indeed between a rock and a hard place,” he said. – Copyright The Financial Times Limited 2019 (Additional reporting: Blooomberg)