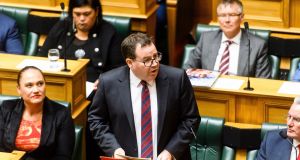 Incoming Central Bank governor Gabriel Makhlouf explained the way confidential details of the New Zealand government’s upcoming budget were taken from the New Zealand treasury’s website in this way: “Imagine you’ve got a room in which you’ve placed important documents that you feel are secure, that are bolted down under lock and key.” Somebody, he said, had found a weak bolt and attacked it, “deliberately, repeatedly, persistently”.

The treasury was hacked, its chief and incoming governor of the Central Bank of Ireland, Mr Makhlouf, said. The situation was very serious. He’d called in the police.

New Zealand knows now that’s not what happened. After a brief investigation, police said the information was not hacked and appears to have been obtained through search results from the treasury’s own website.

The opposition National Party in New Zealand confirmed its responsibility for obtaining the information, and demonstrated video recordings of how researchers used simple key phrases in the treasury website’s search window.

Political observers point to a single precedent. In 1986 a junior press secretary to then New Zealand finance minister Sir Roger Douglas distributed copies of that year’s budget to a select group of opinion formers in advance of its release. The document circulated widely and, when the breach became apparent, the minister offered his resignation. It was not accepted.

Mr Makhlouf refused to answer questions over mounting calls to consider his position on Thursday even as criticism continued to broaden beyond the National Party.

Tim Watkin, a blogger at pundit.co.nz, said Mr Makhlouf “failed to protect the budget and then misrepresented events”.

John Armstrong, with the state-owned television network TVNZ, went further. Mr Makhlouf “has to go”, he said in a column, “a breach of budget secrecy – especially one of this week’s magnitude – is something so serious that resignation is mandatory”.

The New Zealand finance minister, Grant Robertson, expressed “disappointment” with treasury, but stopped short of calling for a resignation. He said he was now waiting for the results of an inquiry into the affair. Peter Hughes, the state services commissioner who oversees the civil service, is investigating.

Mr Makhlouf is slated to stand down from the treasury on June 27th. He is due to become governor of the Central Bank in September.

1 Sacrificing pubs for schools: Ireland’s latest Covid trade-off
2 Owner of Dundrum Town Centre to sell prized assets
3 Elderly parents living in property you own will save you on capital gains tax
4 Hiring right people is key in Meath liqueur firm
5 How safe is it to go back to the office?
6 How to . . . move (almost) everything to your new phone
7 IPL to pay deal-breaker fee if it finds better offer than €350m
8 Roll up, roll up: capitalism will drive cannabis legalisation in Ireland
9 How Tony Buzan used mind maps to doodle his way to millions
10 Eggs in a bottle – liquid gold for free-range producer
Real news has value SUBSCRIBE