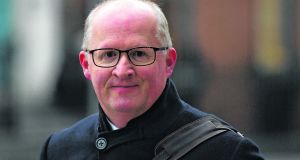 Philip Lane: he takes on his new role at a time when the prospect of raising the ECB’s main rate has been pushed out to at least next year

Philip Lane has been confirmed as the European Central Bank’s next chief economist with effect from this weekend when he joins the organisation’s executive board.

His new role was published on the ECB’s website on Tuesday following a meeting of the institution’s executive board.

The economist, who has been governor of the Central Bank of Ireland since late 2015, was selected by EU leaders in March as the next member of the ECB’s executive group, succeeding Belgium’s Peter Praet, who retires this Friday.

While Mr Praet was the ECB’s chief economist it did not necessarily follow that his successor on the board would also be given the same function. However, as no other member of the board holds a doctorate in economics, aside from ECB president Mario Draghi, Mr Lane was widely expected to be given the role, which is crucial for framing debates and decisions on monetary policy.

He takes on the role at a time when the prospect of raising the ECB’s main rate has been pushed out to at least next year. ECB governing council member Francois Villeroy de Galhau said on Tuesday that low interest rates were “completely justified” by the euro zone’s current economic situation.

Mr Lane, who secured his PhD in economics at Harvard University in 1995, will be succeeded on an interim basis at the Central Bank of Ireland by deputy governor Sharon Donnery.

However, Ms Donnery missed out to former UK civil servant Gabriel Makhlouf in the recent race to find a full-time successor to Mr Lane.

Mr Makhlouf, who has been serving as the chief executive and secretary to the New Zealand Treasury since 2011, will take up his new position in September, making him the first overseas official to fill the post in the institution’s 76-year history.