Ireland included on US economic watchlist 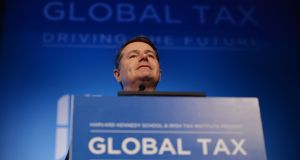 The US Treasury included Ireland on its economic watchlist on Tuesday as it broadened the range of nations it is reviewing for signs of unfair economic practices.

The Department of Finance was quick to defend the Republic’s trade relationship with the US on Wednesday, saying that while the country runs a large goods trade surplus, “we simultaneously run a large services trade deficit”.

“The Irish economy is deeply embedded in global supply chains – we are a very open economy. This is especially evident in our trade with the US, where our two countries have integrated and complex supply chains,” said Minister for Finance Paschal Donohoe.

“Ireland and the US have a mutually advantageous economic bilateral relationship which can be measured by US foreign direct investment into Ireland, and Irish investment in the US,” he added.

Ireland was added to the list because it fulfilled two of three criteria set down by the US Treasury. The first is that it has a significant bilateral trade surplus with the US and the second is that it has a material current account surplus.

Speaking on RTÉ’s News at One programme, Mr Donohoe said “it is likely” that the Taoiseach will raise the issue of Ireland being on the list when he meets US president Donald Trump next week.

Being on the watchlist is a cause for concern, he acknowledged, but the figures will be explored and Ireland will continue to engage with the US administration.

While Ireland’s inclusion on the list was new, more significant was the US Treasury’s decision against labelling China a currency manipulator. While it declared it has “significant” concerns about China’s currency practices, it once again stopped short of designating it a manipulator in a move that avoided further escalation of the two countries’ trade conflict.

The changes to the criteria the US Treasury uses comes on top of a proposal last week from the commerce department of a new rule that would allow the government to slap penalties on countries that “act to undervalue their currency relative to the dollar, resulting in a subsidy to their exports”.

The broadened scope of the Treasury’s regular foreign exchange report to Congress reflects the Trump administration’s more aggressive trade and currency policies, as it seeks to crack down on what it sees as unfair currency policies and reduce the US trade deficit. The US had a record goods deficit of $891.3 billion (€798 billion) in 2018 despite Mr Trump’s vows to tackle the trade gap.

Under the changes to the Treasury report, the US will now examine all trading partners whose bilateral goods trade with the US exceeds $40 billion annually, instead of looking only at its 12 largest trading partners. The 21 countries under the microscope in the latest report amount to $3.5 trillion of goods trade, or more than 80 per cent of all US goods trade in 2018.

The Treasury also adjusted the thresholds it uses to decide whether countries’ economic and foreign exchange practices should be subject to the extra scrutiny of its monitoring list.

The Treasury’s decision not to label China as a currency manipulator will avoid a further worsening of tensions between the two countries following the US decision to boost tariffs on $200billion of imports to 25 per cent. Mr Trump vowed repeatedly during the election to brand China a currency manipulator, but to date his Treasury department has declined to do so.

The department said it would “continue its enhanced bilateral engagement with China regarding exchange rate issues”. This is partly because the Chinese currency has fallen against the dollar by 8 per cent over the past year, alongside what Steven Mnuchin, Treasury secretary, described as an “extremely large and widening bilateral trade surplus”.