Planet Business: Time for one last Brussels get-together for Theresa May 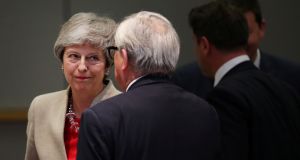 Image of the week: Nebulous sequel

For someone who repeatedly threatened/assured she would “deliver Brexit”, outgoing UK prime minister Theresa May has sure spent a lot of time in Brussels during her three years in office. Maybe it’s the frites? There was one last summit of European Union leaders to attend in the city this week, where she confirmed that it was “a matter of great regret” to her that she hadn’t been able to “deliver Brexit” as indicated pretty much every day since she went to Buckingham Palace in July 2016. The leaders’ dinner on Tuesday brought her into rueful contact once again with European Commission president Jean-Claude Juncker. As people with memories uncompromised by endless Brexit non-delivery will remember, Juncker upset May last December by calling her position “nebulous” – a remark that prompted May to initiate a heated Brussels exchange much studied by lip-readers. With May now yesterday’s woman, there was no such forensic examination this week.

Number of people in 40 countries who watched the grand final of the 2019 Eurovision Song Contest held in Israel, according to data compiled by the organisers, the European Broadcasting Union.

High viewing share captured by the event in the winning country, the Netherlands, where the audience of 4.5 million was the biggest since 2014. With no Irish participation on the night plus a boycott campaign, RTÉ’s ratings dropped sharply to 284,700, a modest 28 per cent share.

Getting to know: Matt Hancock

British health secretary Matt Hancock (40) has joined the line-up of colourful hopefuls for the position of Conservative Party leader and by extension the next UK prime minister. And, like many, he’s no fan of the bookies’ favourite contender at the time of writing, Boris Johnson. Responding to Johnson’s “f*** business” dismissal of the business sector’s concerns about a no-deal Brexit, Hancock told the Financial Times: “To the people who say f*** business, I say f*** ‘f*** business’.” Got that? Hancock is generally against a hard Brexit, stating “the brutal reality” that no-deal is not a policy choice available to the next occupant of number 10, which already puts him ahead of several of his rivals in the sanity stakes. So, to sum up, he’s pro-business, pro-double negatives and pro being the next prime f***ing minister of the UK.

Real Madrid topped KPMG’s annual ranking of the top 32 football clubs in Europe by “enterprise value”, which it says it calculates by its own “proprietary algorithm”. But which clubs posted the sharpest increases in their value last year?

1: Inter Milan. The Italian club ended a six-year absence from the UEFA Champions League in 2018, helping it post a 41 per cent surge in value to €692 million.

4: Chelsea. Worth an estimated €2.2 billion, the London club enjoyed a 26 per cent rise in its enterprise value.

5: Lazio. Selling a few star players seems to have helped the bottom line at the Rome-based club, which saw its enterprise value rise 23 per cent, though it is only ranked 28th in KPMG’s league overall.