Brexit ‘the biggest and most unknown threat’ to travel industry 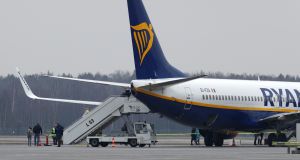 Brexit represents “the biggest and most unknown threat” to the travel industry, members of the Irish Travel Agents Association (ITAA) have been told.

ITAA chief executive Pat Dawson said while the UK government had agreed to reciprocate EU aviation agreements in the event of a no-deal Brexit, travel advisers report a hesitation in bookings as prospective holidaymakers await a formal political agreement.

He was speaking at the group’s annual general meeting in Dublin. “The commitment from the UK government regarding aviation agreements was a welcomed reassurance that flights will not be impacted and there will be no change to the way we travel, regardless of the Brexit outcome,” Mr Dawson said.

“We expect bookings will begin to return to their usual levels as confidence returns and travellers can commit with certainty,” he said.

Despite warnings that a no-deal Brexit could see thousands of flights between Britain and the EU being grounded, members of the European Parliament recently voted in favour of continuing to recognise, for an interim period, UK-issued European Aviation Safety Agency certificates in the event of a no-deal Brexit.

While the regulation needs support from the European Council to become legally binding, it is expected to preserve European air travel in the event of a hard Brexit.

Despite this Brexit concern, Mr Dawson said the ITAA was reporting full employment across member agencies and encouraged younger people to consider getting involved with the travel industry.

The association’s most recent quarterly survey is also reporting positive travel figures, as 50 per cent of travel advisers expect turnover to increase in 2019.

Last year saw an increase of 4.2 per cent in the number of overseas trips by Irish residents to almost 8.3 million, Mr Dawson said.

Considering changing travel trends, the ITAA was reporting a comeback for Greece and Turkey following a quiet few years, he said, while noting Spain and Portugal continued to hold their own in the Irish market.

“Travel to the States has seen massive growth in recent years. Routes boast large capacity and the competition is huge, making it a brilliant offering for the consumer both in regards to destination choice and for price,” he said.

Recently released figures from Dublin Airport echo this growth in transatlantic travel citing a 16 per cent increase in traffic, as Dublin Airport recorded more than 4 million annual passengers on North American routes for the first time.