Before the last crash, the occupant of the governor’s chair was usually a retired apparatchik from the Department of Finance 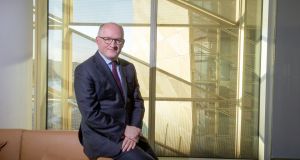 Governor of the Central Bank Philip Lane. The State has launched an international search for a replacement for Mr Lane, who is the next ECB chief economist. Photograph: Tom Honan

The official job advertisement released by the Government yesterday as part of its search for a replacement for European Central Bank-bound Philip Lane was quite a bit longer than the above. But it needn’t have been.

The State has launched an international search for a replacement for Lane, who is the next ECB chief economist.

As if it were hiring a new sales manager or a replacement for Linda in accounts, the Government has even retained a recruitment consultancy to help: Merc Partners. The State has given prospective candidates two weeks to register their interest for the seven-year post.

Before the last crash, the occupant of the governor’s chair was usually a retired apparatchik from the Department of Finance. Since we all copped on to ourselves, the Government has taken quite a bit more care with the appointment.

Lane’s replacement, the ad says, must have “excellent organisational and management skills” and also “excellent interpersonal and communication skills”, which you don’t always associate with typical proponents of the dismal science.

The successful applicant also must have “policy-making experience”, which comes in handy when you’re a State’s primary prudential regulator, and also the “ability to develop and oversee implementation of the Central Bank’s strategic plans so as to reinforce the confidence of citizens and the political system”.

Arguably the most important attribute required, however, is the “credibility and integrity to lead the Central Bank”. In essence, you must have the status and the willingness to tell interfering politicians to take a hike.

Lane stood firm in recent years when a queue of elected representatives pressured him to relax mortgage lending limits for consumers. But the restrictions to prevent overborrowing were designed precisely for the current scenario.

As long as our housing market remains undersupplied and people complain to their politicians, the gumption to tell legislators to solve the problem the correct way – by building more houses, rather than relaxing loan limits – is essential.