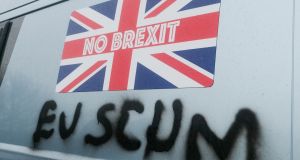 If Charles Darwin was still alive I suspect he may have had more than a few doubts about his theory of evolution. “Survival of the fittest” is a phrase redolent of progress: the idea that natural selection makes us stronger, more likely to live long and prosper. Observing the current state of British politics – particularly its politicians – Darwin might wonder about his ideas. If these are the fittest, the strongest, the best, what did the weakest, those that haven’t survived, look like?

Brexit is many things. A cry of pain from the so-called “left behind”, a protest against immigration, an expression of nostalgia for a mythical past. Yet the most disturbing aspect of Brexit is the easy and casual adoption of extremist views.

How did those dull British, where the word revolution has almost been expunged from the dictionary, find their appetite for the far reaches of both left and right? Where is that famous pragmatism, the conservatism of the Conservatives?

All media, both old fashioned and new, are full of interviews with Britons who claim to think that “just leaving” is now the best way forward on the grounds that “nobody will starve”. Seriously. My favourite line of the last few days was delivered by an elderly, white Englishman (it usually is) who said that “for as long as there are rabbits in the field and potatoes in the ground, we will survive”.

It used to be about “taking back control”, stopping immigration, making a bonfire of Brussels regulations and reaping the economic benefits of a “global Britain”. We’ve gone from promises of these sunny uplands to sullenly sounding like Gloria Gaynor. “We will survive.”

For an individual, self-harm is an awful and tragic consequence of psychological trauma. I’m not sure if there is any precedent or easy explanation for a nation to embrace self-harm with such obvious alacrity.

Political theorists try to remind us that there are many similar episodes from history when prolonged periods of peace lead too many people into extremism as fear, or even awareness, of the consequences fade from memory. Perhaps the true lesson of history is that war is the ultimate Darwinian process.

The most sinister aspect of the whole thing is the way in which Brexit is a project of an ultra right wing faction of English nationalists. This group, many of whom have now founded their own political grouping – with all the characteristics of a distinct and separate party – within the Conservative government, want nothing less than a revolution. Like many of their historical forebears, this desire is as much for the thrill of shaking up the existing order without much of an idea about what comes next. A bit like invading Iraq. Or maybe just old-fashioned anarchy.

Whether the journey is to the left or the right of the political spectrum, if you travel far enough you will end up meeting the loonies coming from the other direction. The entryist fellow travellers of the European Research Group remind me of the old-fashioned Trotskyites of the past. In any event, substantial parts of both the ruling Conservatives and opposition Labour party now want the same thing, albeit with different, if inchoate, hopes for the consequences of the revolution.

It almost seems quaint to try and think through the economic consequences of all this. Any discussion of the financial ramifications of Brexit immediately runs into a wall of derision. The legacy of “project fear”’, the warnings issued by almost every mainstream economist in the run-up to the 2016 referendum, is a poisonous one. A widely held belief is that those economists got it so wrong, were so politically compromised, they should never be trusted again. Michael Gove’s trashing of expert opinion casts a long shadow.

Bashing economists, particularly their forecasts, is easy and fun. I do it all the time. The funny thing is, many of those pre-referendum forecasts were correct. Or, at least, as correct as these things can be.

One forecast that was egregiously wide of the mark was made by the tiny band of pro-Brexit economists.

Chris Giles, the FT’s economics guru, recently ran the rule over the forecasts made by the usual suspects just before the June 2016. All of the politically unconnected forecasting institutions got it roughly right. The independent Office for Budget Responsibility, for instance, got the size of the UK economy in 2018 almost exactly right – it was a tiny 0.1 per cent wrong. The pro-Brexit Economists for Free Trade forecast error was 25 times bigger. Almost as wrong was the Treasury – George Osborne has a lot to answer for.

Nobody is listening but they should. The experts who got the last three years right are not optimistic about the future. It’s hard to factor a political nervous breakdown, never mind a revolution, into forecasting models.

But we know the picture won’t be a pretty one. Investment, in particular, has already slowed to a virtual stop. Recent numbers suggest that UK companies actually have plenty of cash but are simply keeping it in the bank. To invest in the future requires a certain amount of optimism.

Survival can take many forms, some better than others.