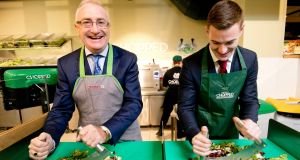 The group behind Spar, Londis and Mace in Ireland has signed a deal with healthy food retailer Freshly Chopped to become its exclusive distributor and supplier.

BWG Group’s deal with Freshly Chopped is valued at more than €100,000 per week or €5.5 million a year and could significantly grow Freshly Chopped’s presence in Ireland. As part of the deal, BWG will offer Freshly Chopped outlets to its franchise network of 800 stores.

Brian Lee, the co-founder and managing director of Chopped, said the partnership will help the company bring healthy fast food to “more people across Ireland”.

“When we founded Freshly Chopped in 2012, our mission was to make it as easy as possible for the people of Ireland to eat healthily. This partnership with BWG will help us to continue on our journey,” he said.

BWG Group chief executive Leo Crawford said deals like this one have come to the group due to their “continued investment”, which is helping to attract new supply partners.

The deal with Freshly Chopped will not affect BWG’s deal with coffee group Insomnia, but will offer further choice to the company’s franchise partners, a BWG spokesman said.