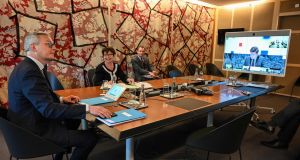 The European Commission is to propose a recovery fund of more than a trillion euro, including a mix of grants and loans, its executive vice president Valdis Dombrovskis said after finance ministers met over video conference.

The commission hopes to put together a fund even greater in size than proposals by France and Germany, who have expressed support for a 500 billion euro pot of grants, in a bid to combat an economic slump caused by the coronavirus pandemic forecast to be the worst in a century.

“Our ambition is not to increase the financing capacity in the range of hundreds of billions, but rather by a figure exceeding a trillion euros,” Mr Dombrovskis told reporters.

“Of course in this case we are talking about both in loans and grants.”

The fund would be designed to incentivise the European Union’s long-term strategic priorities, including digitalisation, investment in research and innovation, and overhauling economies to make the bloc climate-neutral by 2050.

The plan is due to be laid out on May 27th as part of a plan for the seven-year joint EU budget.

It will then go forward for discussion among national leaders of member states, who need to give it their unanimous consent.

Mário Centeno, Portugal’s finance minister and president of the Eurogroup of members of the single currency, urged countries to “draw inspiration” from the joint Franco-German proposal as they seek to forge consensus.

“Bridging differences in crisis times is a proof of leadership and a good omen for future discussions,” Mr Centeno wrote after the meeting.

The joint plan by Paris and Berlin has been greeted as a major shift by German chancellor Angela Merkel as it opens the door to joint borrowing to finance spending in member states, a departure from previous policy seen as a statement of strong commitment to the EU as it weathers a series of challenges.

Mr Dombrovkis indicated that under the commission’s plan, the grants and loans could come with conditions including economic reforms. This could flag a potential point of conflict with some of the hardest-hit countries by the pandemic, Italy and Spain, where voters are deeply opposed to a repeat of the austerity of the bailout years and have appealed for aid free from such obligations.

“We not only need additional money for the recovery, but we also need reforms, we need to ensure a business environment that is conducive to investment,” Mr Dombrovskis said.  “So, as part of our recovery instrument, we intend to propose . . . a recovery and resilience facility, which will be concentrating on investments and structural reforms.”

A group of countries led by the Netherlands have insisted that financial help to hard-hit countries should come in the form of loans rather than grants, and should be contingent on reforms they believe would put the economies on a stronger footing for the future.

During the meeting, the 27 finance ministers formally adopted the SURE programme, a scheme of €100 billion euro in loans from the commission to member states to allow them to finance employment schemes, such as supplementing company wages to avoid layoffs due to the pandemic.