Arrest of US financier in Moscow shocks investment community 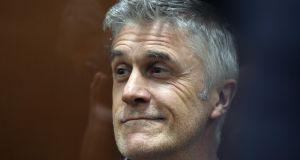 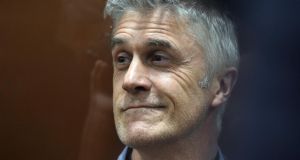 Law enforcers in Moscow have arrested the American founder of a Russia-focused private-equity fund on fraud charges in a case that has sent shock waves through the local investment community.

Michael Calvey, founder and senior partner of Baring Vostok Capital Partners, was taken into custody late on Thursday night along with four other employees from the investment firm.

Russian prosecutors have accused the US-born financier of defrauding Vostochny Express Bank, a mid-sized Russian bank in which Baring Vostok is the controlling shareholder, of Rbs 2.5 billion (€33.4 million) and demanded that he be held without bail.

If found guilty Mr Calvey could face up to 10 years in a Russian jail.

At a hearing in a Moscow court on Friday evening, Mr Calvey denied wrongdoing and said he was ready to co-operate with investigators.

Judge Artur Karpov extended Mr Calvey’s arrest for an extra 72 hours, and called another hearing on Saturday . Four other defendants in the case have been ordered to remain in pre-trial custody for two months.

Various shareholders in Vostochny Express were using the case to further their cause in a commercial dispute with Baring Vostok that had already gone to arbitration in London, he said.

Baring Vostok issued a statement saying that the charges against Mr Calvey and four other of of the firm’s employees “were related solely to an ongoing commercial dispute connected with Vostochny Express”. “Baring Vostok and all of the funds’ portfolio companies, including Vostochny Express Bank, continue to operate business as usual,” it added.

“He did a great deal to attract foreign investment to the Russian Federation and also helped many Russian companies to grow and mature,” Mr Dmitriev told reporters on the sidelines of a conference in Munich on Friday.

Bill Browder, US-born founder of Hermitage Capital who fled Russia in 2005 after becoming embroiled in a highly controversial fraud case, said Mr Calvey’s arrest should be seen as “the final straw that Russia is an entirely corrupt and uninvestible country”.

“Of all the people I knew in Moscow, Mike played by their rules, kept his head down and never criticised the government,” Mr Browder wrote on Twitter on Friday.

Founded by Mr Calvey in 1994, Baring Vostok is one of the oldest and largest private-equity firms focused on Russia and the former Soviet Union with some $3.7 billion of committed capital.

Vladimir Putin, who has been holding meetings with the leaders of Belarus, Turkey and Iran in the Russian resort town of Sochi this week, had not been informed about the case against the Baring Vostok executives, a Kremlin spokesman told reporters on Friday evening.