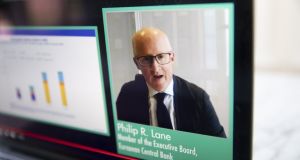 The Federal Reserve has adopted a new strategy for monetary policy that will be more tolerant of temporary increases in inflation, cementing expectations that the US central bank will keep interest rates at ultra-low levels for years to come.

Jay Powell, the Fed chair, announced the shift as he addressed the Jackson Hole monetary policy symposium, which began in virtual format on Thursday.

“Because the economy is always evolving the FOMC’s [Federal Open Market Committee] strategy for achieving its goals – our policy framework – must adapt to meet the new challenges that arise,” Mr Powell said.

The centrepiece of the Fed’s new approach is the move to an average inflation target which will allow it to overshoot the US central bank’s 2 per cent target to compensate for persistently low inflation, which has been weighing on the US and other economies in recent years.

“Following periods when inflation has been running below 2 per cent, appropriate monetary policy will likely aim to achieve inflation moderately above 2 per cent for some time,” Mr Powell said.

However, the Fed chairman said the central bank’s acceptance of higher inflation did have limits. Mr Powell said the overruns would be “moderate” and not extend over long periods.

“If excessive inflationary pressures were to build or inflation expectations were to ratchet above levels consistent with our goal, we would not hesitate to act,” he said.

The Fed also adjusted its thinking on the labour market and the level of employment that can be maintained without leading to destabilising consumer price increases.

Mr Powell said the “subtle” change “reflects our view that a robust job market can be sustained without causing an outbreak of inflation”.

He added that “going forward employment can run at or above real-time estimates of its maximum level without causing concern, unless accompanied by signs of unwanted increases in inflation or the emergence of other risks that could impede the attainment of our goals”.

The Fed’s new approach was formalised by a FOMC statement on its longer-run strategy and goals. It could set the stage for the US central bank to issue new, more detailed forward guidance on the necessary conditions for it to raise interest rates from their current level near zero.

The Fed explicitly acknowledged the constraints posed by the current level of interest rates. Mr Powell stressed that “the Fed has less scope to support the economy during an economic downturn by simply cutting the federal funds rate”.

On a subsequent panel at the Jackson Hole symposium, Philip Lane, chief economist of the ECB, reiterated that it was prepared to inject more monetary stimulus if needed to ensure that inflation did not persistently undershoot its target of just under 2 per cent.

He said such a low inflation scenario would be “costly” in slowing the recovery from the pandemic and “risky” because “a longer phase of even lower inflation might become entrenched and contribute to a downward drift in inflation expectations”.

In practice, the Fed under Mr Powell has already moved away from the inflation-fighting mantra that characterised its policies in previous decades, most notably under the chairmanship of Paul Volcker.

But crystallising that change has taken on added importance after the US was hit by the pandemic. The median forecast of Fed officials does not predict an interest rate increase until after 2022 at the earliest. Mr Powell has previously said the Fed was not “thinking about thinking” about tightening policy.

“This largely just codifies the extremely dovish policy strategy the Fed has already been following. Fed officials have been very concerned about the severe damage to the labour market and the desire to swiftly return the unemployment rate back to its pre-Covid level,” said Kathy Bostjancic, chief financial economist at Oxford Economics.

The Fed also reframed its views on maximum employment, stating that the goal is now a “broad-based and inclusive” one, highlighting the central bank’s heightened sensitivity to economic inequality in the US.

“This change reflects our appreciation for the benefits of a strong labour market, particularly for many in low- and moderate-income communities,” Mr Powell said in his speech.

He highlighted the gains achieved prior to the coronavirus outbreak, in which black and Hispanic unemployment rates fell to record lows. “The robust job market was delivering life-changing gains for many individuals, families, and communities, particularly at the lower end of the income spectrum,” said Mr Powell.