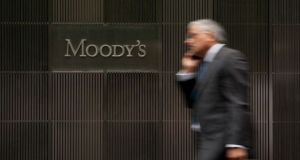 The Irish economy will contract by 8.5 per cent this year as a result of the economic shock triggered by the coronavirus pandemic, ratings agency Moody’s has warned.

The agency, which had previously predicted only a small economic contraction of 1.6 per cent of gross domestic product (GDP), said the Government’s prudent management of the economy to date would not be enough to prevent a recession in 2020.

The strict lockdown measures implemented in the second quarter had resulted in severe disruptions on the supply side and weak domestic demand, it said.

The agency also cautioned that its outlook was subject to a significant downside risk from a more adverse coronavirus impact, a messy Brexit and global corporate tax reform.

Nonetheless, it said the activity of multinationals and the resilience of key sectors such as pharmaceuticals and information and technology would “mitigate” the impact of the shock on GDP data.

In its latest report on the Republic, it said the Irish economy has been growing strongly since 2014 but the coronavirus outbreak would put a halt to this “as the lockdown weighs on productive capacities and households’ consumption, and given the slowdown in global trade”.

Nonetheless it forecast the economy here would bounce back to rapid growth next year with GDP expanding by about 6 per cent.

The outlook for the Republic’s A2 credit rating, which facilitates the Government’s low-cost borrowing, was stable, it said.

“Our credit view of Ireland reflects the strong growth and fiscal track record of the past few years and our expectation that the positive trends will resume after the economic shock triggered by the coronavirus outbreak has faded,” it said.

“However, challenges will remain in the form of elevated high public debt levels and a relatively high degree of economic volatility.”

The agency said downward pressure on the Republic’s debt rating would emerge if the course of fiscal policy changed, putting at risk the downward trend in the debt ratio.

Clarity on post-Brexit trading arrangements would potentially remove a source of uncertainty and increase positive credit pressures, it said.

Moody’s said that after two years of small surpluses, it forecast the Government would record a deficit of 9.1 per cent of GDP, or €30 billion, this year, with strong tax collection in the first half of the year partly mitigating for the introduction of new measures to support pandemic-impacted workers and health services.

It noted that the fiscal cost of the Government’s July stimulus was €3.7 billion, including €2.8 billion in expenditure and €0.9 billion in lost revenue. The package will also extend into 2021, and its estimated cost is €1.8 billion next year.

Altogether, direct supports related to the measures announced since the start of the pandemic amount to €20.5 billion (6.2 per cent of GDP), in addition to the €2 billion credit guarantee scheme and the €2 billion Pandemic Stabilisation and Recovery Fund, it said.

“The return to sizeable deficits will halt the debt reduction trend, and we forecast the Government’s debt burden to reach 68.1 per cent of GDP in 2020.

“Given that the Irish authorities have substantial cash buffers, we do not think that all of the increase in the deficit will be debt-creating,” it added.