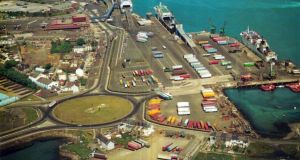 The port at Larne, Co Antrim: According to a new survey, nearly a third of businesses in the UK and Northern Ireland are looking to export more, despite the Brexit vote.

Northern Ireland companies believe the European Union will remain their primary market for exporting regardless of how Brexit plays out, latest research suggests.

A new international trade survey shows that businesses in the North see the EU as their primary market for both selling and sourcing goods and services post-Brexit. The survey was carried out by the British Chambers of Commerce (BCC), in partnership with the Northern Ireland Chamber of Commerce and Industry (NI Chamber).

The results highlight that about three-quarters of firms in the UK and Northern Ireland currently sell (76 per cent) and source (73 per cent) goods and services in the EU market. They also draw attention to how important UK companies and local firms consider future trade arrangements with the EU to be.

Businesses in the UK and the North identified the top priorities in relation to any post-Brexit trade deals to revolve around the issues of tariffs, non-tariff barriers, and product standards, certification and compliance.

Northern Ireland firms also said their biggest concern was the possibility of a hard Border between the North and the Republic.

The research underlines how important the EU market is to businesses in the North, said Ann McGregor, chief executive of the NI Chamber.

“Locally, we are seeing evidence that some members are focused on expanding into new export markets in response to Brexit, which is a real positive,” she said. “Equally, however, we have members where the uncertainty created by Brexit has had an immediate and negative impact on business performance.

“Businesses want the best possible terms of trade following the Brexit negotiations, whatever the ultimate model adopted,” Ms McGregor added. “Clarification on any sort of Border controls between Northern Ireland and the Republic of Ireland is crucial.”

In the survey, the British Chambers of Commerce and the NI Chamber also asked businesses if the EU referendum vote had already influenced their approach to exporting. Nearly a third (31 per cent) said they are looking to export more, while 65 per cent said the referendum had not changed their strategy for importing.

Another 15 per cent said they were interested in sourcing more internationally, but 13 per cent also reported intending to source less internationally. Both chambers said this could be attributed to the decline of sterling, which is making imports more expensive.