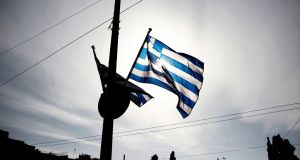 Flagging the issue: Greek debt is “highly unsustainable”, according to the IMF. Photograph: Kostas Tsironis/Bloomberg

Greece’s public debt and financing needs will prove “explosive” in decades to come unless Europe overhauls its bailout programme to ease the load, the International Monetary Fund has said in a draft report as the country seeks a fresh loan payout.

In the IMF’s baseline scenario, Greece’s government debt will reach 275 per cent of its gross domestic product by 2060, when its financing needs will represent 62 per cent of GDP, the report says. The government estimates public debt at about 180 per cent of present GDP.

The European Union’s view of the evolution of Greek debt is “more benign” and based on “significantly more optimistic assumptions”, the IMF notes. The document also says some Greek debt proposals by euro-area finance ministers “are not specific enough to enable a full assessment” of how they would affect sustainability.

Greece and its creditors are locked in negotiations on how the nation can close its fiscal gap, in line with the requirements of the €86 billion aid programme agreed with the European Commission, the European Central Bank and the IMF. Failure to strike a deal would hold up the release of the next portion of bailout funding.

The IMF board is set to discuss Greece’s ability to service its debt on February 6th. The fund has resisted pressure from countries including Germany and the Netherlands to contribute to the bailout programme, seeing it as doomed unless Greece takes further steps to rein in spending or euro-area governments ease the terms of the loans.

Europe’s aid programme for Greece is credible and backed by contingency measures to handle unforeseen events, a spokesman for the European Stability Mechanism, an EU agency that provides bailout loans to Greece, said in an emailed statement on Sunday.

“We see no reason for an alarmistic assessment of Greece’s debt situation,” the spokesman said, adding that Europe had made clear commitments to support the country with additional debt relief after the programme. The statement makes no direct reference to the IMF draft.

As in the past, the IMF is proposing that Europe extend grace periods and maturity dates on the loans. The document also calls for further deferral of interest payments and to lock in interest rates.

For its part, Greece needs to tackle tax evasion and broaden its tax base, the IMF says, repeating recommendations in previous reports. It also needs to rebalance spending away from pensions and deal with bad loans that are weighing on banks.

Greek debt is “highly unsustainable” and “even with the full implementation of policies agreed under the European Stability Mechanism program, public debt and financing needs will become explosive in the long run,” the document says, adding that a “substantial restructuring” of European loans to Greece is required to restore debt sustainability.

The IMF agrees with Greece’s euro-area creditors on one point. Both want Greece to introduce a law triggering austerity measures if the country fails to maintain a budget surplus before interest payments of 3.5 per cent of GDP. Greek finance minister Euclid Tsakalotos last week rejected that demand as “unacceptable”.