One of every two Dublin rentals now only for tourists, Daft.ie study claims 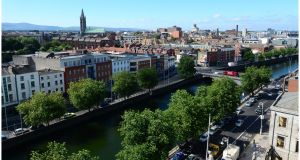 Daft.ie says the stock of homes on the Dublin rental market was likely to dip below 1,000 units by the end of this year, for the first time since 2001. Photograph: Bryan O’Brien

More than half of the available rental properties in Dublin are being listed as short-term tourist lets, according to Daft.ie.

The property website, which claims to be responsible for about 90 per cent of long-term lettings in the capital, said it had 1,258 properties available for long-term rental on its site as of Tuesday of this week.

Figures from the independent monitoring website Inside Airbnb showed the stock of properties to let on Airbnb from professional listers, as opposed to people temporarily renting their own homes, stood at 1,419.

This means that 53 per cent of homes in the Dublin rental market are currently not available to long-term tenants, Daft.ie’s Martin Clancy said.

He also noted there was unlikely to be any overlap between the two sets of figures, as the ones on its website were listed as long-term rentals while the ones on Airbnb were for short-term stays.

The findings come amid fears that landlords in Dublin may be avoiding rent controls and other regulations by opting to let to tourists rather than to long-term tenants.

“Entire home listings on Airbnb in Dublin last year represented just 1.1 per cent of the available housing stock in the city, and the vast majority (88 per cent) of hosts share the home in which they live with guests,” a spokesman said.

He noted the company had made suggestions to Government for clear and fair home sharing rules for listings in Dublin.

In an interview this year, Airbnb country head Aisling Hassell said only 550 homes were rented for more than 160 days a year – the threshold beyond which, she said, income from short-term lets would be worth more to them than opting for the long-term letting market.

In its report, Daft.ie says the stock of homes on the Dublin rental market was likely to dip below 1,000 units by the end of this year, for the first time since 2001. That, it says, is further evidence that the decline in long-term rental accommodation was continuing.

Mr Clancy said the fall-off in listings was being driven by a lack of supply. “Rents have been rising as supply continues to bottom out nationwide,” he said.

“Despite a cap of 4 per cent on sitting tenants, rental inflation has been above 10 per cent nationwide and shows no sign of abating without a sharp increase in supply,” he said.

Ipav, the Institute of Professional Auctioneers and Valuers, linked the trend to “ disproportionate regulation” of private landlords.

“The private landlord, who has been the mainstay of the rental market, is being forced by increasingly onerous regulation to find alternative solutions and the tourist market is an obvious one,” Pat Davitt, Ipav chief executive said.

“The private landlord is taxed at a much higher rate than commercial landlords or vulture funds,” he said.