Encouraging more women into the workforce would benefit economy 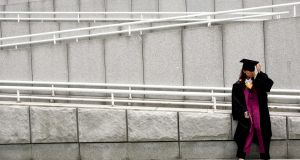 Among younger women, while our participation rates for female graduates are higher than those of our EU neighbours, for women with Leaving Cert education they are significantly lower.

There are many signs that the Irish economy is growing close to its potential output. In particular, the stress in the housing market, with rapidly rising prices, reflects a serious capacity constraint.

With the unemployment rate heading below 5 per cent next year, another indicator suggesting limits on future growth is the rising number of firms reporting skill shortages.

We have learned from the past decade that driving an economy above the “speed limit” can have very serious consequences. In the short term, as the Fiscal Council and Minister for Finance Paschal Donohoe have suggested, the best approach is to tighten fiscal policy to slow the economy.

However, in the medium term, the right response is to take measures to expand the ability of the economy to grow by tackling the underlying constraints on capacity.

In the case of housing and other infrastructure, the answer is to invest more. Policies to address this constraint are, all too slowly, beginning to work.

In the case of labour shortages, the first response should be to take action to raise labour force participation by facilitating those who are not working, but might like to do so, to re-enter the labour market.

Expanding labour supply by increasing participation rates has a special attraction under current circumstances: those who might rejoin the labour force and take up a suitable job are generally already housed.

The work of the Central Bank suggests that there are a substantial number of economically-inactive people who might be attracted back into the labour market, many of them women.

The exceptional economic growth of the 1990s – where the economy grew by on average 8 per cent a year between 1994 and 2000 – owed a lot to the increased labour market participation of females.

Women at home formed an important pool of skilled labour when demand for workers grew as the economy expanded. About a quarter of the growth of the 1990s can be attributed to the rise in women’s economic participation.

While the proportion of women in the labour force is a lot higher now than in the early 1990s, it is generally below that in other EU-15 countries. Whatever their level of education, over-35s have lower participation rates than their EU-15 counterparts. Here childcare and after-school care are likely to be a factor.

Among younger women, while our participation rates for female graduates are higher than those of our EU neighbours, for women with Leaving Cert education they are significantly lower.

Participation rates for female graduates are still much higher than for other women. This reflects the fact that, because graduates tend to earn substantially more than other employees, they are in a better position to pay the high cost of commercial childcare.

To allow female participation rates to rise, it is clear that there will need to be significant additional investment in childcare. Direct investment by the State in childcare will be expensive.

However, some of the costs would be recouped through higher taxes arising from the resulting employment.

The logistics of after-school care can prove a particular challenge for parents. It therefore makes sense to make provision for onsite, after-school care as investment in new schools, or refurbishing existing ones, is expanded.

A 10-year strategy was adopted by government in 2015 to raise employment rates of people with disabilities. Above all, the strategy calls for support at key transition points, whether on leaving the education system or at onset of a disability. Census 2016 showed encouraging signs that employment rates of people with disabilities have risen as the economy picked up.