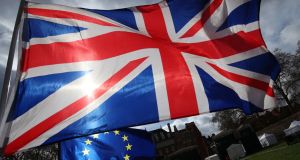 The UK could fall into a recession that could spill out across the global economy in the event of a disruptive no-deal Brexit, the Organisation for Economic Co-operation and Development (OECD) said.

In its latest interim outlook report, the Paris-based think tank said a no-deal scenario would knock around 2 per cent off UK growth over the next two years, but cautioned the effects would be “stronger still” in a disorderly exit from the EU.

It would likely spark a UK recession – two or more quarters of negative growth in a row – which could cause a “major adverse shock” in the EU and beyond, it said.

The OECD forecast a “near-term recession” would be likely if Britain crashed out of the EU on March 29th with a lack of adequate border infrastructure and a loss of access to EU trade arrangements with third countries.

The organisation cut its growth forecasts for the global economy for the second time in as many quarters, warning that trade tensions and uncertainty over Brexit could hit trade and business. It predicted the world economy would grow 3.3 per cent in 2019 and 3.4 per cent in 2020.

“High policy uncertainty, ongoing trade tensions, and a further erosion of business and consumer confidence are all contributing to the slowdown,” it said.

“Substantial policy uncertainty remains in Europe, including over Brexit. A disorderly exit would raise the costs for European economies substantially.”

Europe remains impacted by uncertainty over Britain’s plans to exit the EU, the US - China trade spat and other weak spots, such as signs of a recession in Italy.

For Germany, Europe’s largest economy, the OECD more than halved its 2019 GDP growth forecast to 0.7 per cent from 1.6 per cent previously. It predicted a light recovery to 1.1 per cent growth in 2020.

Meanwhile, data earlier this month showed that US personal income had fallen for the first time in more than three years in January while consumer spending dropped by the most since 2009 in December, putting the world’s biggest economy on a relatively weak growth trajectory early in the first quarter.

China, the world’s second biggest economy, has also faced signs of stuttering growth. China is seeking to shore up its slowing economy through billions of dollars in planned tax cuts and infrastructure spending, with growth at its weakest in almost 30 years due to softer domestic demand and a trade war with the US.

1 Knock gets visit from world’s largest passenger plane
2 A maverick taking on the Irish whiskey establishment
3 Why Sweden ditched its negative rate experiment
4 Will Avolon find itself on the block as China prepares to seize troubled parent HNA?
5 Review: prepare to flip over Samsung’s new folding phone
6 Irish cultural exports helped pave the way for economic growth
7 Nothing beats practice in bid to master public speaking
8 Dr Pepper owner in talks to take over former Lidl distribution centre
9 Kingspan amasses €750m war chest to fund acquisitions
10 How do you know if you are wealthy? It’s not straightforward
Real news has value SUBSCRIBE