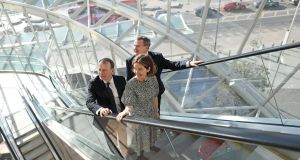 “Brexit is not a British phenomenon” but a European-wide revolt against Brussels, BBC presenter Andrew Marr has claimed.

While not advocating Brexit, he said there was an “underlying logic” to wanting to leave the EU in order to pursue an alternative economic model – something Brexiteers referred to as Thatcherism 2.0 – which was under-appreciated in the liberal media and in Ireland.

At event hosted by employers’ group Ibec in Dublin, the popular TV interviewer and pundit also warned that the possibility of Britain leaving without a deal remained “a very high possibility” despite recent parliamentary manoeuvres.

“I think in a kind of ‘oops, didn’t mean that’, butter fingers kind of way, no deal is still quite likely,” he said.

In a wide-ranging speech, he dismissed the notion that Brexit was an “irrational spasm” linked to the loss of empire. “We get a lot of stuff in the British media about Brexit being completely irrational. That it’s just a nationalistic, imperialistic, out-of-time spasm directed against modernity and the future,” he said.

“There is an underlying logic to Brexit, but the problem is the people promoting it don’t talk about it in public. They don’t speak about it openly because it would frighten the horses.”

Advocates, he said, believe Britain should pursue an alternative economic model along the lines of the so-called Singaporean model, which would involve deep cuts to corporation tax and a wholesale jettisoning of regulations to attract inward investment.

“You slash corporation tax right down, way below where it is right now, you slash regulations, you tear up your environmental and worker protections and you go for broke, you go for bust,” he said.

“Now that is the underlying logic behind Brexit and, I think, a lot of Conservatives and certainly Ukippers privately would talk about it being Thatcherism 2.0,” he said. This is why many in the Leave camp were quite comfortable with a hard Brexit, he said.

Mr Marr said such a course of action was extremely high risk as it would involve massive cuts to the social spending that sustained the National Health Service (NHS) and the UK welfare state, as revenues from corporation tax would be much lower.

While Brexit was complex and multifaceted, it could be linked to two pillar events, Marr said: the financial crisis and the jump in immigration after EU enlargement in 2002.

“We have a situation where after the 2008 financial crisis lots of people across the EU and across Britain felt desperately excluded, economically damaged and badly hurt and wanted to hit back and they have hit back in all sorts of different ways across the EU,” he said.

“Our form of the insurgency happened in Britain because we were offered a referendum at exactly the moment when people were feeling angriest,” he said.

“Here was somebody who was absolutely determined that we should stay inside the EU and who held a referendum which took us out of the EU. By any definition that must count as a fairly serious political error.”

But Mr Cameron’s biggest mistake was not securing a better deal from Europe on immigration. “Had he got that he’d have probably won the referendum,” Mr Marr said, noting net immigration from the EU rose from about 45,000 a year to nearly 200,000 a year after EU enlargement.

“That did have an effect on wages for people who were already feeling quite put upon and under pressure,” he said.

Mr Marr said Brexit may be just the beginning of a reshaping of British politics and that he found it hard to believe British prime minister Theresa May would be able to govern for another year given how split her party is and that an election “is not very far away”.

He said he did not believe there would be a second referendum .

“We are going to see Britain leaving the EU and we’re going to see after that a huge fight for the next direction of British economic and social policy,” he said.