KBC Bank/ESRI consumer sentiment index falls to 86.5 in February from 98.8 in January 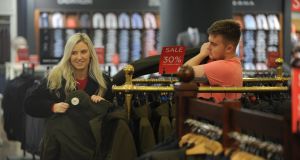 While all elements of the KBC Bank/ESRI index fell, consumers’ concerns were strongest about macroeconomic questions.

Shoppers could cut spending if fears of a hard Brexit and a weaker Irish economy persist, experts warn in a report today.

Consumer confidence tumbled in February following a nurses’ strike and the British parliament’s rejection of prime minister Theresa May’s Brexit deal, according to figures released by KBC Bank and the Economic and Social Research Institute (ESRI).

“Irish consumer sentiment fell sharply in February on a notably poorer outlook for the Irish economy and jobs that translated into poorer household income prospects,” the KBC Bank/ESRI index states.

KBC Bank Ireland chief economist Austin Hughes says there is no immediate threat to spending, but suggests that consumers could tighten purse strings if their concerns continue.

While the bank and economic researchers expected the uncertainty to dent consumer confidence, they say that the depth of the fall was surprising.

The KBC Bank/ESRI consumer sentiment index fell to 86.5 in February from 98.8 in January, and was down sharply on the 105.2 recorded during the same month last year.

“Consequently, we don’t envisage and sharp pullback in spending,” he says. “However, the February survey period did see a number of developments that may have unnerved many consumers and prompted an outsize drop in confidence.

“If this persists we would expect consumer spending to move on to a weaker path.”

Mr Hughes blames politics and industrial unrest on both sides of the Irish Sea for the fall in confidence.

He believes one factor was Mrs May’s failure to get her Brexit deal through parliament, increasing the risk that the UK could crash out of the European Union without an agreement.

During the period, a number of reports, including documents from the Central Bank and KBC, highlighted the damage that a disorderly or “hard” Brexit could do to the Irish economy.

At home, he says that the nurses’ strike and the debate over the national children’s hospital cost could have reminded consumers of previous industrial relations turbulence and issues with managing public finances.

While all elements of the index fell, consumers’ concerns were strongest about macroeconomic questions.

The number of consumers who expected unemployment to rise jumped to almost four out of 10 from 22 per cent the previous month.

However, they only modestly changed their assessments of their household finances over the previous 12 months.

“So the reality of consumers’ current circumstances hasn’t fundamentally changed,” says Mr Hughes. “However, the risks to the future were seen to materially worsen.”

He argues that with reduced pessimism over Brexit and the ending of the nurses’ strike, it would not be surprising to see consumer sentiment rebounding this month.