Northern businesses have been ‘hung out to dry’ 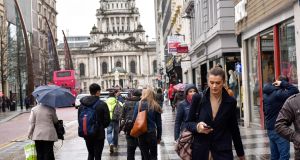 One business leader said industry leaders had told the British government directly that the no-deal Brexit plan would not work in Northern Ireland but that their concerns were ignored. Photograph: Bloomberg

The UK government’s “shambolic” no-deal Brexit plan “leaves Northern Ireland hung out to dry”, industry leaders from all sectors in the North have warned.

Following Theresa May’s defeat on her withdrawal deal on Tuesday night, the UK government has published its plans to avoid a hard border in Ireland if crashes out of the EU without a deal.

It undertakes that there were will no “new checks or controls on goods at the land border between Ireland and Northern Ireland, including no customs requirements for nearly all goods”.

But business leaders in the North said the British government’s exit plan will lead to “chaos” and only create a new, more powerful black-market economy around the Border.

Industry chiefs in Northern Ireland were aware of the British government’s no-deal Brexit plan for the North prior to its publication but were unable to comment on it before Wednesday because they had been forced to sign non-disclosure agreements.

Seamus Leheny, policy manger for the Freight Transport Association in Northern Ireland, said the plan would be “disastrous” for businesses in the North.

Mr Leheny said businesses and industry leaders had told the British government directly that the no-deal Brexit plan would not work in Northern Ireland but that their concerns were ignored.

“Northern Ireland will be the biggest loser in a no-deal Brexit and this system that the government is proposing is disastrous, unsustainable and leave indigenous companies in Northern Ireland at a disadvantage.

“It’s not going to work because it creates the environment for people and organisations that are less than honest to use Northern Ireland not pay tariffs and HM Revenue & Customs [HMRC] cannot ignore that so what happens next? An extremely hard border in the Irish Sea? Enforcement on the Border? Smuggling across the island? It’s all shambolic,” Mr Leheny said.

A representative of the agri-food alliance, representing the main food organisations in the North, said food buyers had already begun to “hedge their decisions”.

“These proposals could give the European Union unfettered access to Northern Ireland, and therefore Great Britain, whereas Northern Ireland producers will not be able to freely export to the EU,” said the alliance representative.

“Agri-food supports £1 in every £6 in the Northern Ireland economy, employing some 100,000 people. A ‘no-deal’ Brexit on these terms would be devastating. It would crush our farming base, destroying family businesses within weeks and would decimate investment leading to closures and job losses. We would also face gridlock on our roads and at our ports with the increased volume of goods coming from the Republic of Ireland in transit to Great Britain.”

The British government has stated in its no-deal Brexit plan for the North that it recognises that “Northern Ireland’s businesses will have concerns about the impact that this approach would have on their competitiveness”.

According to Stephen Kelly, chief executive of industry group Manufacturing NI, which represents many of the North’s largest employers including Bombardier, it is not simply competitiveness that his members are worried about.

He believes the plan will lead to “chaos and actually encourage lawlessness”.

“In the space of 12 hours, we’ve moved from the potential of the best of both worlds to the worst of all worlds.

“The plans from HMRC and others for no deal at the Border in Ireland mean goods going South or into the EU will be subject to costs and complexities whereas the door is thrown open for good travelling North. Legitimate businesses will work with the UK, illegitimate ones won’t. There won’t be any controls or collection so there is no risk, so why bother?”

The UK’s Northern Ireland secretary of state Karen Bradley has said it was still the UK government’s position that a deal with the EU would be the “best outcome” for the North.

She maintained that the latest “measures” recognised “the unique circumstances of Northern Ireland”.

“These arrangements can only be temporary and short-term,” Ms Bradley said.

However the general view among businesses in the North on Wednesday was at odds with Ms Bradley’s assessment.

Aodhán Connolly, director of the Northern Ireland Retail Consortium, said: “The Government and the EU must see that this is simply now a mess. No tariffs and no extra checks is not just no short term solution – it is no solution at all.

“A UK tariff-free position in Northern Ireland would effectively mean a hard border in Ireland as the EU will act to secure its single market and customs union from cheap, low-standard imports and arbitrage. The people who will suffer most are legitimate businesses and farmers in Northern Ireland who will not be able to move their goods to the Republic of Ireland without tariffs whereas Republic of Ireland goods will have free rein and it will be a goldmine for criminals.”

And with the countdown to Brexit under way in earnest there was one very clear message from businesses in the North to Theresa May on Wednesday: “We’re not ready for a no-deal exit.”

“There are serious questions over deliverability, and potentially consequences for the island of Ireland on smuggling and tariff proposals,” she said.

Ms McGowan said the plan would leave the Republic with “no option” but to apply EU tariffs on all goods coming from the UK and would require “substantive checks” to take place at the Border.

“This desperate and ill-thought-through trade measure will create all the conditions for a hard border in Northern Ireland,” she said.

“It’s quite startling that these proposals have been devised with little regard to Northern Ireland’s economy and living standards.”

Ann McGregor, chief executive of the Northern Ireland Chamber of Commerce, said: “Despite 2½ years passing since the referendum, there is no clear plan to support those businesses at the sharp end of such an abrupt change.

“The implications for Northern Ireland are starkly portrayed in a recent British Chambers of Commerce and NI Chamber Brexit survey where two-in-five NI firms said that in the event of a no deal they would plan to move all or some of their business to the EU.

“Against this backdrop, it is critical that government and parliament pull out all the stops to avoid a no-deal scenario and the messy and disorderly exit that it will bring.”