An Taoiseach Leo Varadkar says the Brexit deal negotiated by the UK and EU should eliminate any doubts and fears over the backstop. Video: Merrion Street 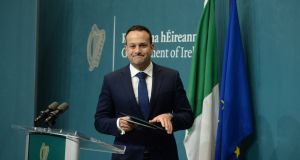 Taoiseach Leo Varadkar has said the agreement reached between the UK and the EU on Monday night is “positive” and “does not undermine the backstop”.

“I hope and trust that the withdrawal agreement will now be endorsed by the House of Commons”, Mr Varadkar told reporters at an 8am press conference in Government Buildings.

“It does not reopen the withdrawal agreement or undermine the backstop,” Mr Varadkar added.

Mr Varadkar said the new Brexit documents agreed between the EU and UK “provide additional layer of interpretation, clarification and elaboration” ahead of votes tonight in Westminster.

The British government claimed on Monday night it had won legally binding changes to the Northern Ireland backstop after the European Union agreed to two additions to the Brexit withdrawal agreement.

During late-night talks in Strasbourg, Theresa May and European Commission president Jean-Claude Juncker signed off on a joint interpretive instrument on the withdrawal agreement and a joint statement on the political declaration.

David Lidington, the prime minister’s de facto deputy, told the House of Commons the interpretive instrument has the same legal status as the withdrawal agreement. He said it provides confirmation the EU cannot try to trap the UK in the backstop indefinitely and that doing so would be a breach of the legally-binding commitments both sides have agreed.

“If – contrary to all expectations – the EU were to act with that intention, the UK could use this acceptance of what could constitute an explicit breach as the basis for a formal dispute, through independent arbitration, that such a breach had occurred – ultimately suspending the protocol if the EU continued to breach its obligations,” he said.

Mr Varadkar, who last night delayed a trip to Washington for St Patrick’s Day, told reporters on Tuesday morning: “As you know, Prime Minister May met with President Juncker in Strasbourg a last night where they agreed an interpretative instrument on the withdrawal agreement and a joint statement on the political declaration on the future relationship between the European Union and the United Kingdom.

“The documents are complimentary to withdrawal agreement and the political declaration and aim to provide an additional layer of interpretation, clarification and elaboration to the United Kingdom ahead of a further voter in Westminster.

“We are aware the United Kingdom has also published a unilateral declaration alongside the two joint documents agreed. In the context of tonight’s vote inn Westminster. The outcome of yesterday’s meeting with Prime Minister May and President Juncker is positive.

“I hope and trust the withdrawal agreement will now be passed by the House of Commons. In discussion with the UK, the Government has worked hand-in-hand with our EU partners and our EU institutions, including the Commission and the task force led by Michel Barnier.

“In that work we have insisted that the withdrawal agreement could not be rewritten and that the backstop arrangement, while intended to be temporary, must continue to apply unless and until it is replaced by future arrangements that will achieve the same objectives: namely no hard border.

“However, we have also said we’d be prepared to offer guarantees and reassurances to the United Kingdom of our good faith and intentions. Indeed we have offered such reassurances on many occasions. The instrument agreed yesterday puts those assurances on a legal footing and represents an unambiguous statement by both parties of what has been agreed.

“It does not reopen the withdrawal agreement or undermine the backstop or its application. It says we will work together in good faith in pursuit of a future relationship which ensures that the objectives of the protocol, particularly the need to avoid a hard border.

“We are also committed to exploring alternatives in a timely way in the event that the overall future relationship cannot be concluded in a satisfactory and timely manner. But it does not call into question that the backstop will apply unless and until better arrangements are agreed with all parties using good faith and using best endeavours to that aim. So the options to ensure the avoidance of a hard border on the island of Ireland continue to correspond to what was agreed as far back as the joint report in December 2017, which envisages these being achieved by one of three means.

“First, a comprehensive future relationship between the EU and the UK. Second, specific solutions or third, in the absence of agreed solutions, regulatory alignment, ie the backstop.

“The documents agreed yesterday reiterate our wish to establish a future partnership with the UK that is as close as possible and marks our commitment to ensure that our negotiations on the future relationship can begin as soon as the United Kingdom leaves. The instrument agrees in detail how we will go about this important work.”

Mr Varadkar said it also “recalls the dispute resolution mechanisms within the withdrawal agreement that could be invoked were either party to demonstrate bad faith, including the possibility of seeking a ruling from a panel of arbitrators.

“And the further steps agreed yesterday provide additional clarity, reassurance and guarantee sought by some to eliminate doubt or fears, however unreal, that the goal of some was to trap the UK indefinitely in the backstop. It is not. These doubts and fears can now be put to bed.

“The withdrawal agreement, as you know, provides for a transitional period running at least until the end of 2020, during which nothing will change. This is really important for exporters, businesses employers, farmers and our fishermen. And regardless of the vote tonight, we have already secured the continuation of the Common Travel Area, the free movement of people north and south, and between Britain and Ireland. The right to live, work study and access healthcare, housing, education, pensions and welfare in each other’s countries as if we were citizens of both.

“This is particularly important for citizens and students, cross border workers and expatriates in both countries. Irish citizens in Northern Ireland will, of course, continue to be citizens of the European Union no matter what happens.

“In many ways, Brexit has been a dark cloud over us for many months, and in particular the threat of no deal. A positive vote tonight can remove that cloud and restore confidence an optimism in Britain, Ireland and across the European Union. We now need to see the withdrawal agreement ratified by Westminster and the European Parliament without further delay so we can get on with the important work of building a new relationship between the EU and the UK and between the UK and Ireland, post Brexit.

“I now feel, for the remains of the day, we need to give MPs in Westminster the time and space to consider what is now on the table.”