Could an Irish referendum delay or even derail Brexit?

‘Unavoidable’ that talks on article 50 will trigger a referendum here, seminar hears 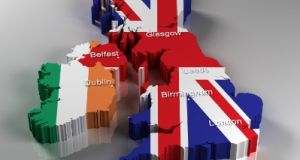 A think-tank founder has said talks on article 50 of the Lisbon Treaty – the provision that allows for a member state to leave the bloc – would lead to a referendum here. Image: iStock 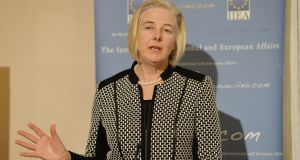 Catherine Day: “You can never get away from the fact that even if you don’t have to have a referendum, sometimes people propose them.” Photograph: Alan Betson

Could Irish voters block a future deal to withdraw Britain from the EU by rejecting it in a referendum? With the clock counting down to the formal commencement of the two-year Brexit negotiation process, some EU specialists are debating whether the project could be delayed, or even derailed, by a vote of the Irish people.

The prospect is sure to intrigue EU lawyers, preoccupy Government negotiators and cause heads to explode in the editorial offices of the London tabloids.

At a seminar hosted last week by the Institute of International and European Affairs (IIEA), a Dublin-based think-tank, founder Brendan Halligan said he had long been of the view that talks on article 50 of the Lisbon Treaty – the provision that allows for a member state to leave the bloc – would lead to a referendum here.

In a briefing paper published earlier this month, Mr Brennan argued that, taking account of previous Supreme Court decisions, a “working assumption” must be that whatever legal agreements (note the plural) result from the Brexit talks will be put to referendums in the State. The outcome would hardly be a foregone conclusion.

“If this treaty results in a major disruption to the Irish economy, a deterioration of the exchequer’s position, and the introduction of UK tariffs on some sensitive Irish agri-food products, will the Irish electorate vote Yes? Unlikely,” he wrote.

Speaking from the floor at the IIEA event, former minister for finance Alan Dukes spelled out the implications. “Is it really conceivable that we would face a referendum, one of the outcomes of which might be that we would say no, the UK cannot leave?”

A definitive answer must await the conclusion of the talks, most likely in autumn 2018. In principle, however, we know the Brexit deal would trigger a referendum here if it goes beyond the scope or objectives of existing EU law, or violates the sovereignty clause in the Constitution by imposing new restrictions on the Government.

Given that the agreement will have to be ratified by all member states, a rejection by Irish voters would have unknown consequences.

Catherine Day, former director general of the European Commission, said it was her understanding that the article 50 deal would not require a change to the EU treaty and would therefore not automatically trigger a referendum in the Republic.

Gavin Barrett of the School of Law at UCD and an expert on EU law, said the deal appears unlikely to force Ireland to do anything that it’s not already doing in the EU. He points out that neither German reunification, “which radically altered the power balance within the European Union”, nor the post-2004 enlargement rounds necessitated plebiscites here.

“So, in principle, I don’t see any particular reason why a shrinkage of the European Union should trigger a referendum either,” Prof Barrett said.

That position could shift, however, if the Brexit deal was to involve the creation of a new institution – one to regulate the new relationship between the EU and UK, or Dublin and London, for example.

“If institutions like that involved giving away power or committing to undefined policies, then it might theoretically be possible that a referendum might be necessitated,” said Prof Barrett, though he think it is a remote possibility.

That’s the legal principle. But referendums are not only about the law; they’re also about politics. “You can never get away from the fact that even if you don’t have to have a referendum, sometimes people propose them,” said Ms Day.

The current environment may make such demands more likely. Up until now, every EU referendum here has been held because the Government believed the Constitution required it. But the fact that serious discussion is taking place about a referendum on public ownership of the water infrastructure suggests that a new type of plebiscite could be around the corner.

Moreover, deciding whether a referendum must be held is not an exact science. At least some Irish negotiators involved in drafting the EU fiscal treaty, an agreement that tightened budgetary rules during the financial crisis, believed they had done enough to ensure a referendum was not required.

The Attorney General advised differently, and the treaty was approved by public vote in May 2012.

Given the high political cost that any government would incur by deciding against a referendum, only to be ordered to hold one by the judiciary, any cabinet faced with having to weigh two reasonably strong arguments for and against will err on the side of caution.

“The consequences of getting that decision wrong are very severe,” said Prof Barrett. “If there is even a strong possibility that a referendum is needed, then you have to have a referendum.”