Brexit: UK’s article 50 Bill to be rushed through parliament 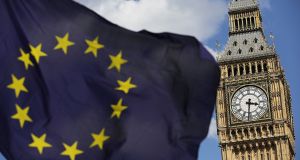 Legislation paving the way for Theresa May to start the Brexit process will be published on Thursday. Photograph: Daniel Leal-Olivas/PA Wire

Legislation paving the way for British prime minister Theresa May to start the Brexit process is to be rushed through the House of Commons within a fortnight.

The European Union (Notification of Withdrawal) Bill will face its first test next week, with debates on Tuesday and Wednesday.

It is likely to clear the Commons, with Labour leader Jeremy Corbyn ordering his MPs to join the Tories in backing the Bill – a move which has already seen one of his frontbenchers quit and could yet trigger a wider revolt.

Tulip Siddiq resigned as shadow early years education minister, saying she could not “reconcile myself to the frontbench position” after Mr Corbyn imposed the three-line whip compelling Labour to support the legislation.

Despite the order to support the Bill, Labour has proposed a series of changes, including giving the Commons the first say on any proposed deal with Brussels,before it is put to European leaders and MEPs.

“Labour will seek to amend the article 50 Bill to prevent the Government using Brexit to turn Britain into a bargain basement tax haven off the coast of Europe,” Mr Corbyn said. “Our country can do much better than that.”

He said Labour respected the will of the British people, but “not the will of this Tory government to impose fewer rights at work and worse public services, while the largest corporations pay even less tax”.

Despite the historic significance of the legislation, the Bill is just 140 words long and contains only two clauses, one of which is the title.

MPs reacted with anger after it was confirmed that the detailed scrutiny stages – where dozens of amendments are expected to be considered – will be allocated just three days, with the Bill expected to clear the Commons on Wednesday, February 8th.

The government was forced to draw up the Bill after losing an appeal at the Supreme Court, where judges ruled that parliament must give permission to start the Brexit process.

The new law is being fast-tracked through parliament in order to meet the Prime Minister’s deadline for triggering article 50, thereby beginnnig negotiations to leave the European Union, by the end of March.

The opposition Liberal Democrats have vowed to oppose the Bill unless there is a guarantee of a new public vote on the final Brexit deal agreed with Brussels, and the Scottish National Party has indicated its MPs will table 50 amendments to the legislation.

SNP Commons leader Pete Wishart said “everything will be rushed through” and concluded within days for the Bill, as he pressed the government to publish its Brexit White Paper before committee stage.

A number of Labour MPs also hit out at the amount of time given to debate the Bill, with Chuka Umunna accusing the Government of trying to “muzzle” the Commons.

But Commons Leader David Lidington, who announced the timetable, accused MPs of expressing “synthetic rage” and insisted that plenty of time has been given to the short Bill.

After clearing the Commons the legislation will be passed to the House of Lords, where the Government does not have a majority, for further scrutiny.

But ministers are confident they will be able to get the Bill passed and peers are expected to be mindful of the fact that as unelected parliamentarians they risk accusations of attempting to frustrate the democratic will of the people if they hold up the legislation.