Need to ask where Brexit is heading? You haven’t been paying attention 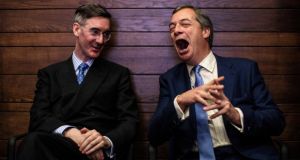 Anyone who asks where Brexit is heading hasn’t been paying attention. Or maybe that question is intended to be wryly ironic. Nobody, not least in the British government, has much of an idea about what happens next. The UK is now in the middle of a constitutional crisis.

These don’t come around too often, but historical precedent points to both further chaos and unpredictable outcomes. And as, amid all the madness, a legal clock is ticking, we can in fact identify the most likely Brexit outcome. It isn’t pretty, and there are plenty of other possibilities: there are lots of runners in this race, and even the favourite has long odds against.

Before we get to that, a bit of history.

The Brexit ultras sense total victory and have adopted the methods and mantra of their new best friends, the DUP. There will be no surrender

As soon as Theresa May gave her infamous Lancaster House speech, almost two years ago, setting out a list of impossible-to-deliver demands, it became easy to predict the future. The Brexiteers’ superficial soundbites, empty slogans and sloppy thinking would, sooner or later, have to confront reality. The only thing that wasn’t predicted – was not predictable – in early 2017 was what would happen once reality intruded into the Brexit process. Now we know – or know at least part of the answer.

The former Conservative chancellor Kenneth Clarke has for years warned that the Europhobic wing of the Tory party would never compromise: no matter what concessions it gained, it would never be sated, always coming back for more. He was right: the Brexit ultras have behaved as predicted and no longer bother to conceal their desire for a total rupture between the United Kingdom and Europe. Their chances of getting what they want have never been higher. They sense total victory and have adopted the methods and mantra of their new best friends, the DUP. There will be no surrender.

How can that be, given that Brexiteer fantasy has now run full tilt into the brick wall of reality? It’s a weird kind of inverse car-crash politics: the politicians driving the country into a wall are not the ones hurt by the collision. The spectators, particularly the poorest and most vulnerable, are the victims. Clarke’s former Cabinet colleague Michael Heseltine has been making some magisterial speeches about all of this in recent weeks. They are well worth looking at, if only to remind ourselves that there still some decent, thoughtful politicians in the UK.

That certainty I mentioned: for the United Kingdom to leave the European Union on March 29th, 2018, all that needs to happen is nothing. To put it slightly differently: to stop the hardest Brexit of all, as a matter of EU law, something very dramatic now needs to occur.

A vote in the UK parliament approving the Withdrawal Agreement is the most obvious way forward, but that possibility looks dead in the water. There is an obvious large majority in the House of Commons against the agreement. So either the British parliament has an unlikely change of mind or Brussels has an even more implausible volte-face over its determination not to renegotiate that agreement.

To avoid a hard Brexit something needs to be done, but all three available policy levers are marked ‘Too hard to pull’

Given that impasse, the ticking clock of the article-50 process means the UK goes over the cliff edge in 3½ months. As a matter of law, to avoid that cliff Theresa May must somehow get her deal approved or delay or cancel Brexit. Delay requires unanimous approval by the 27 remaining members of the European Union. Cancellation can be done unilaterally (and would probably be accompanied by a second referendum, a general election, or both).

Any one of these three options looks unlikely. To avoid a hard Brexit something needs to be done, but all three available policy levers are marked “Too hard to pull”.

So, amid all the sound and fury, the probability of an economic, political and social catastrophe is growing by the day. These things are terribly subjective, but it seems to me that the risks of an accidental Brexit, the one that only the fanatics want, are now higher than ever. Perhaps catastrophe is now the most likely outcome of all. It’s worth repeating: something rather dramatic now needs to happen to avert this.

The EU and the UK have stepped up their preparations for a hard Brexit. That might be interpreted as a negotiating tactic, but I think it would be more accurate to consider it a hard-headed response to what is happening on the ground. We need to get ready for an awful Brexit because that’s what we are most likely to get.

Most of us will recoil from all of this. We believe that disaster can be averted, that adults will soon take charge and deliver a reasonable outcome. Our beliefs are shaped by what we hope will happen, what we think should happen. The prospect of catastrophe offends our sense of order, our view of human rationality and reason. They also reflect the fact that these days few of us study history.