Chris Johns: As the UK fragments, the DUP are ideal candidates for this year’s Darwin award 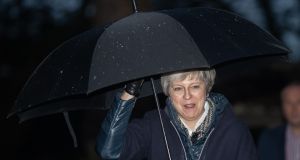 The United Kingdom is an oxymoron. It is more fragmented, if not dangerously divided, than at any time in living memory. Even the divisions over the Irish quest for Home Rule are not comparable: some historians reckon that the only people who truly cared about that were the Irish themselves, a few shire Tories, newspaper owners and their friends in Parliament. Today, the tribal divisions over Brexit are as wide as they are deep. Commentators pen articles about their dinner party Brexit fights and their only slightly less confrontational conversations with taxi drivers. Everyone has an entrenched opinion. And very few have changed their minds.

Opinion polls suggest a small majority would now vote to remain. But those polls probably only reflect the numbers of leave voters who have died since the referendum. The older you were, the more likely you opted for Brexit. Those Britons still alive have, by and large, stuck to their original views, notwithstanding the emergence of any new evidence or facts.

Our unwillingness to change our minds - about Brexit or pretty much anything else - would be familiar to anyone who has ever run a business. Just ask any chief executive how hard it is to fundamentally change anything, except in the middle of an existential crisis. To be fair, up there with the greatest lies of all time are the typical chief executive claims to be open minded and “ I always welcome challenge”. Behavioural scientists have explored this aspect of our nature and think that it’s got something to do with habits developed when we were running around the Savannah. Tribal identity and cohesion were more important for survival than truth or facts. Changing one’s mind was dangerous in all sorts of ways.

Evolutionary biology and psychology are a bit reductionist for my taste - everything we are today is surely a bit more evolved from when we were chasing woolly mammoths. But the way so many of us say we embrace change, yet remain wedded to habits and behaviours impervious to reason or facts, is a bit weird. Scientists have conducted experiments that offer monetary rewards to people for listening to material that conflicts with previously expressed views: the evidence is that even when cash is offered, we prefer not to hear, let alone change our minds. Nobody retweets views they don’t agree with, except to mock.

Brexit is many things, including a very large laboratory investigation into human psychology

Brexit is many things, including a very large laboratory investigation into human psychology. Researchers have gone to parts of the UK that voted to Leave. They focused on people who had ‘Immigration’ and ‘What did the EU ever do for us?’ at the top of their lists of gripes. When it was pointed out that these voters often lived in areas without hardly any immigrants but with plenty of roads and public buildings funded by the EU, the typical response was: “none of that is true”.

If the Brexit process has resembled a very slowly boiled frog, the temperature is now approaching boiling point. The coming week could be tumultuous. When reflecting on the British and their reputation for stoicism, tolerance and well-ordered governance, it is tempting to think that things probably aren’t quite as bad as I suggest. They are. The country has retreated into tribal bunkers, escape from which is going to be tricky in the extreme.

If a new referendum is the long-odds horse suddenly making a late run, don’t assume a benign outcome. My reading of the mood - and the tactics of the Brexiteers - is that any referendum that asks ‘Hard Brexit or Remain?’ will see the British holding hands as they jump over the cliff. The strategists behind the original Leave campaign are regrouping and devoting a lot of thought to the wording of any potential second referendum.

Surveys say that the UK stock market has become uninvestable. The economy has stalled and could be close to recession. The housing market is weakening by the day. An ex-minister suggests using food supply threats to bully the Irish. The government is reported to be drafting powers to overrule doctors’ drug prescriptions and to allow commandeering space on ferries for food imports - both measures aimed at dealing with shortages. Brexiteers are fond of saying “we coped with two world wars so we can cope with anything”. Rationing may remind them of those halcyon days.

It’s the time of year when various prizes are awarded. The Economist newspaper this week awarded Boris Johnson it’s most special award: the politician who has most let down his party and country.

The Darwin awards are a whimsical prize given to anyone who successfully eliminates themselves from the species by their own actions. Darwin, of course, gave us his theories of evolution. If he meant that we always make progress, I’m not sure that he was right. But if the extinctionists running the Darwin awards are looking for a candidate for this year’s prize, I’d like to suggest the DUP. The UK is fragmenting in all sorts of ways. Few of us may change our minds, but only a small number need to do so to put a United Ireland in prospect. This column once suggested that Theresa May might be the last prime minister of the UK. If that was hyperbole I’ll amend it slightly: one of the last.