Italy has the largest absolute debt load of any EU country, and the third largest in the world 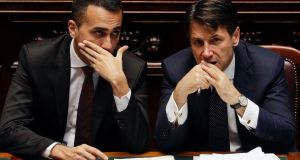 Frankfurt’s European Central Bank doesn’t do forgiveness. Like the corner shops of old, there should be a sign up in the lobby: “Please don’t ask for credit as refusal often offends.”

That message got through to Italy’s two new governing parties, the hard-right Lega and the populist 5Star Movement. Mysteriously their election insistence that the ECB should simply forgive €250 billion in Italian debt vanished from their final joint programme for government.

There never was any prospect of that happening – even though in Mario Draghi they have an Italian at the helm – and the two parties needed to reassure deeply jittery markets that there was at least a modicum of economic common sense in their ranks. But Italy’s European partners will take a lot more convincing.

The country’s unknown new prime minister, Guiseppe Conte, presented his new administration’s programme to the senate on Wednesday, a laundry list of problems that the government would confront: the Mafia, conflicts of interest, Italy’s arthritic healthcare system, its Byzantine bureaucracy, jobs, youth unemployment, pensions, the environment, the brain drain, overtaxation and just about every ill of Italian society. But he offered few specifics on how his government would do it.

Debt remains the key challenge – at €2.3 trillion, or 132 per cent of GDP, Italy has the largest absolute debt load of any country in the EU, and the third largest in the world after the US and Japan. In the EU only Greece, at 180 per cent of GDP, exceeds that in percentage terms.

And yet the new government is pledged to implement a programme that promises simultaneously to reduce taxes for the middle-class supporters of the Lega in the north of the country, and raise welfare for the unemployed and poverty-striken backers of 5Star in the Mezzogiorno region in the south.

Among its key policy promises is a two-tiered flat tax – firms and individuals will pay either 15 per cent or 20 per cent of income in tax, as opposed to the current 43 per cent for the top income bracket.

And it is proposing a €780-a-month basic income for poor families, the so-called “citizen income”, reduced in the final programme to an income for a maximum of two years for those unemployed willing to accept any job offer (no residents with foreign citizenship will be eligible).

And then there’s the costly repeal of pension reforms, introduced at the height of the 2011 debt crisis, to push back down the age of retirement.

Promises that would alone amount to at least 6 per cent of gross domestic product (GDP), economist Silvia Merler estimates. If enacted it will open a huge spending-revenue gap, enough to drive a coach and horses through EU budget and deficit disciplines. It could, many economists fear, jeopardise the euro itself.

Withdrawal from the latter was also an earlier part of the disappearing manifesto of the two parties. But Conte assured parliament that Italy would stay in its “home,” the EU, and that leaving the euro was “never in discussion”.

It remains a threat, notably from Matteo Salvini, Lega’s leader, brandished occasionally as a warning should the EU refuse to reform.

In Brussels they remain nervously coy, hoping that common sense will prevail and in the certain knowledge that any public criticism will only serve to confirm the winning election narrative that Italy’s woes can all be laid at the door of the bullies in Brussels, Frankfurt and Berlin.

“I will approach the new Italian government openly, and work with it instead of speculating about its intentions,” Angela Merkel said in a weekend interview, echoing the line out of Brussels.

Although she also warned obliquely that there was no free money coming from German taxpayers: “Solidarity among euro partners should never lead to a debt union, rather it must be about helping others to help themselves.”

It’s not that Italy isn’t capable of helping itself. It’s just that the new Italian ruling class has no idea how to do it. Conte told the senate the government will reduce the debt, but “we want to do it by increasing our wealth, not through the austerity measures that in recent years have allowed it to grow”. Without explaining how this conjuring trick will be performed.

In truth, despite the debt mountain Italy is not a Greek-like basket case. Although growing slowly, the economy has been doing so for the last four years. Italy’s GDP growth rate matched that of France and the UK last year, hitting 1.6 per cent. But it is expected to fall to 1.4 per cent this year, and 1.1 per cent in 2019.

Its nominal growth rate – before inflation – is faster, however, than the rate at which it is borrowing, which means that Rome’s debt-to-GDP ratio is actually declining, albeit painfully slowly.

Parts of the country like Milan, which is growing at over 6 per cent, are thriving. The country exports more than it imports, with the result that it had a balance-of-payments surplus of €40 billion last year. And the old government ran a budget deficit that is low at 2.3 per cent and falling.

And so, in its latest assessment, the Organisation for Economic Co-operation and Development says that exports and business investment are increasingly driving a solid recovery.

But the other side of the story is grim. And it is a lived reality that has radically undermined faith in the political system more than anything else.

Twenty years of economic stagnation has left overall per capita income virtually unchanged, and there has been a collapse of about 30 per cent in the income of the 25 per cent of Italy’s poorest, those living in the south, or in the declining peripheries of the centre-north. Every third Italian under the age of 25 is unemployed.

Low productivity is widespread outside the northeastern powerhouse running from Milan across to Venice. Public investment is low, hampered in recent years as much by new public procurement rules as by tough spending limits.

And Italy’s banks are stuffed with bad loans that the government has sought to alleviate by pumping more cash into their reserves. Last year it accepted an increase in its budget deficit from 1.9 per cent to 2.3 per cent as the price of boosting the banks’ balance sheets.

So who’s to blame?

By common consensus in this nation which founded the EU and has sustained almost unanimous support for the union until very recently, the answer is the EU and the euro.

Politicians across the board insist that the “austerity” rules of the Growth and Stability Pact do not allow them to stimulate demand and employment. And the populists in particular paint a picture of a critical loss of independence and economic sovereignty in the euro’s design. Unable to control exchange rates, they insist, Italian goods can’t compete against the German monster.

Paolo Savona, an 81-year-old economist whom the former Italian economy minister Vincenzo Visco described as “radically and suicidally anti-German”, will serve as Italy’s new Europe minister after being rejected for the finance job by President Sergio Mattarella. He has written a book on how to leave the euro, describing it as a “German cage”.

But what is forgotten is that Italy has done well inside the euro. Since it returned to the European Exchange Rate Mechanism in 1996 – after leaving in 1992 – it may have surrendered its monetary sovereignty to the European Central Bank. But in exchange it has enjoyed much lower inflation and borrowing costs, resulting in a dramatic reduction in interest payments on that massive public debt – from 12 per cent of GDP to 5 per cent.

Nor does the forced austerity argument wash. It does simply not add up “to a convincing argument”, says Daniel Gros of the Brussels thinktank CEPS, “that euro area membership was somehow responsible for Italy’s economic underperformance: Spain, Portugal and Ireland, which also had to reduce their deficits in trying times, are recovering much more strongly than Italy.”

Gros argues that the root causes of the current crisis are domestic; they have little to do with fiscal rules or a lack of risk-sharing.

Italy’s slow growth since the turn of the century, he says, cannot be explained through underperformance in investment, education and indicators of market liberalisation; the only area in which Italy’s relative performance has deteriorated since 1999-2000 is the quality of the country’s governance.

“Italy’s corruption and governance problems are long-standing,” Gros argues, “but they have unfortunately deteriorated severely since the start of EMU.... an increasingly important handicap in an increasingly interconnected world.”

The euro has become a scapegoat, he says: “but this scapegoating constitutes an obstacle to deep reforms”.

At the weekend a triumphant leader on the 5Star Movement Luigi Di Maio declared , a la Louis XIV, that now “we are the state”.

“You are not the state, Vice-President Di Maio,” the leader of the Democratic Party, former PM Matteo Renzi, responded in the senate. “You are the power today and, in this respect, you are right that it is your turn. You no longer have alibis with respect to what you will do. You today are the power, the government, the establishment.”

The moment of truth, no more alibis.