Principle of mutualised debt, not the amount, is thing ‘that mattered’ for France 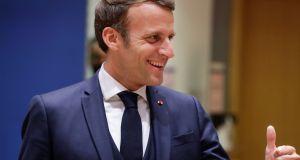 French president Emmanuel Macron gives the thumbs up at a round table meeting during the EU summit in Brussels. Photograph: Stephanie Lecocq/AP

French president Emmanuel Macron and his allies repeatedly used the word “historic” in describing the €750 billion recovery fund agreed by the EU Council early on Tuesday.

“The recovery fund founded on European solidarity is a historic change in Europe and our euro zone,” Mr Macron said in an early morning press conference with German chancellor Angela Merkel. “This is the first time we have established common budgetary measures on such a scale.”

Finance Minister Bruno Le Maire told France Info radio the agreement was “the birth certificate of a new Europe, because for the first time in its history, Europe is raising debt together . . . This new Europe will be based on more solidarity. It will be more green, since 30 per cent of expenditure must be environmental, and more Franco-German, because without the Franco-German couple there would be no agreement this morning.”

Mr Macron said “nothing is possible” without Franco-German co-operation.

The biggest concession made by France during 90 hours of negotiations was the reduction of the amount of grants from €500 billion to €390 billion.

It was the principle of mutualised debt, not the amount, that mattered, French sources said.

Grants were decreased to secure the support of the so-called frugal four, led by the Netherlands. The portion of repayable debts in the recovery fund was raised from €250 billion to €360 billion.

France also accepted an increase on rebates to the frugal four and Germany, from €46 billion to €53 billion over the next seven years. Germany alone among net contributors did not demand a higher rebate.

Mr Macron nonetheless said he had no regrets regarding the agreement. He also showed understanding for the “frugals” – who were widely called “stingy” in French media.

“The frugals have different political sensitivities,” Mr Macron said. “They are often in coalition governments. If we make difficulties for their leaders, we risk favouring the rise of populism in these countries.”

Commentators saw Mr Macron’s influence in the speed, decisiveness and scale on which the EU acted in establishing the recovery fund.

Since last November, Mr Macron has seen like-minded leaders fill key posts in Europe. They are Ursula von der Leyen at the commission, Charles Michel at the council, Christine Lagarde at the European Central Bank and David Sassoli at the EU parliament.

Most important, in May Mr Macron convinced Dr Merkel that the coronavirus pandemic and the economic devastation it wrought made mutualised debt a necessity in Europe.

“I profoundly believe that this decision [on the recovery fund] is a turning point in the history of Europe,” Mr Michel, who conducted the negotiations, told France Info radio.

“We have shown the capacity for unity in a difficult moment and sent a signal to European citizens. Europe is solid. Europe is robust.”

Mr Macron is now expected to pursue other items of his European agenda, including a shift from unanimity to qualified majority voting on fiscal matters, and the raising of digital, carbon and plastic taxes at Europe’s borders.