Is foreign travel during a pandemic antisocial behaviour? 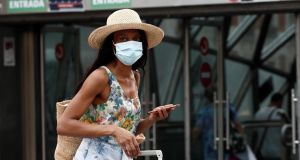 “Foreign travel is the ultimate disease vector. Without it, there would be no pandemic.” Photograph: Mariscal/EPA

No one has really defined what constitutes a second wave of the coronavirus. Are the renewed outbreaks in Spain and Australia round two of the pandemic or merely flare-ups, ones that we will all experience and have to live with until a vaccine arrives?

Your answer to that question will most likely dictate your response to the next. Is foreign travel during a pandemic antisocial? There was disquiet about those who opted to travel back in March when the virus first hit. There is now palpable anger that some are risking the progress made to date in containing the virus by insisting on holidaying abroad.

If there is a resurgence linked to foreign travel, one that jeopardises the reopening of schools next month, the atmosphere could turn nasty.

The spike in cases in Australia has been linked to people coming into the country and authorities there have moved to curtail arrivals and review the functioning of its so-called quarantine hotels.

Spain’s autonomous Catalonia region was also recently forced to reinstate a lockdown for some 200,000 residents following a sharp increase in cases. The renewed outbreak, linked to seasonal agricultural workers, has prompted the UK to reimpose restrictions on passengers returning from Spain, a move described by Ryanair boss Michael O’Leary as a “badly managed overreaction”.

The Government maintains the most restrictive travel advisory of any European Union state and clearly sees foreign travel as a major threat to its virus-containment project.

The Department of Public Expenditure and Reform says public servants who travel abroad will not be paid for their 14-day quarantine on return. That’s a de facto ban on foreign holidays for the State’s 130,000 public sector workers.

Holiday periods for those on jobseeker’s support have also been suspended and payment will not be made to anyone who travels abroad. More than 100 people have had their pandemic unemployment payment (PUP) stopped for boarding aircraft, with gardaí and social welfare officers now carrying out spot checks at airports.

Inside Business with Ciaran Hancock · EU recovery fund: what's in it for Ireland?
Coronavirus Data Dashboard

The public health advice in relation to foreign travel is “very clear” – all non-essential journeys abroad to be avoided – says Minister for Social Protection Heather Humphreys. “The Irish people have sacrificed so much and nobody wants to see us go back,” she says.

And yet, having produced its own “green list” of safe countries to visit, the Government has been accused of mixed messaging on the issue. Critics claim you can’t advise against travel – and penalise workers who do – while simultaneously green-lighting several destinations.

The self-isolating protocols for people returning are also lax, unsupervised and easily flouted.

There’s no getting around it, foreign travel is the ultimate disease vector. Without it, there would be no pandemic. Allowing flights in and out of northern Italy back in March when the virus was evidently rampant in Lombardy was among the biggest mistakes made by authorities here. The first six reported cases in the Republic all involved people who had come from northern Italy.

And yet thousands of people are now opting to ignore the Government’s advice and take off to sunnier climes.

DAA passenger numbers suggest there are about 13,000 people travelling through Dublin Airport on a daily basis, up from a couple of hundred during lockdown, though a fraction of the 120,000 the airport would normally see at this time of year.

The situation is compounded by the fact that Ryanair is refusing to refund tickets bought prior the lockdown, effectively incentivising travellers to stick to their original plans or face the financial consequences.

Social cohesion on containment measures hasn’t been perfect – we’ve fallen down on mask wearing (more mixed messaging) and some elements of social distancing – but it has been way better than in many other countries. And the Government’s proactive stance, even if the science models proved wrong, appears to have played well with an anxious public.

Foreign travel is, however, proving a divisive issue and one that could yet come back to bite. With travel curtailed for several months, community transmission is currently the main source of the virus here but we’re down to a handful of new cases each day.

For many the pandemic has been defined as a tug of war between public health and economics. Protecting one meant damaging the other. The staycation option was one area where both aims coalesced.

Irish residents spent €6.6 billion abroad last year, according to the Central Statistics Office (CSO), more than the €4.8 billion spent here by foreign visitors. Rerouting some or all of this overseas spend into the domestic hospitality industry would at least in part offset the economic shock.

But staycations do nothing for the airline industry and they are pushing back. Eddie Wilson, chief executive of Ryanair DAC, the biggest carrier within the group, yesterday called on the Government to add the EU 27 and UK to its green list of countries for safe travel.

At the Oireachtas Special Committee on Covid-19 Response, he warned that unless the State opened up to air travel, it would suffer structural damage to its economy within six months “that will take years to repair”.

Most expected the lockdown to be followed by a period of reopening and a period of economic recovery. Instead we’re getting a messy in-between.