Pre-budget submission says supports should include training and apprenticeships 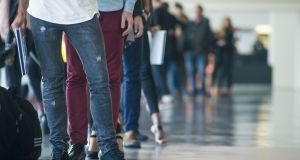 There are 8,915 young people in long-term unemployment. Photograph: iStock

The Government should invest €22 million in education, training and access to apprenticeships in an effort to halve long-term youth unemployment by the end of 2019, the National Youth Council of Ireland (NYCI) said in its pre-budget submission.

Young people from economically and socially disadvantaged backgrounds with limited formal qualifications should have greater access to apprenticeships, while schemes should be developed across the country to “provide supports and address barriers”, the organisation said.

While €22 million is the gross cost, the estimated net cost to the State would be €6 million, according to James Doorley, deputy director of the NYCI. “This investment would lead to reduced social welfare payments as more young people move into employment. For example, if there were 2,650 fewer young people on €107.70, the lowest rate of Jobseeker’s Allowance, this would save just over €14 million per annum,” he said.

The organisation, which represents young people, further suggested that €2 million should be invested in an access to apprenticeship programme.

In order to halve the figure of 8,915 young people in long-term unemployment, the NYCI proposed an additional 2,650 education and training places costing €20 million to assist young people with fewer opportunities.

“Census 2016 indicates that our population aged 10-24 years will increase to over one million by 2025, so we need to invest in policies, services and supports to meet the needs of young people today, while preparing for demographic pressures in the coming years,” Mr Doorley said.

In its pre-budget submission, the NYCI also proposed a €40.5 million investment to restore the full adult rate of €198 to young people on Jobseeker’s Allowance over the next two budgets.

It also called for an €11.5 million investment in voluntary youth work organisations and a service to ensure the provision of more supports and services for young people.

1 Boeing identifies new software flaw in grounded 737 Max
2 Dublin housebuilder records €11m gain after striking deal with bankers
3 Wild Geese: Meabh Quoirin, Future Foundation
4 ‘Life in Vilnius reminds me of Ireland in the 1990s’
5 Irish company that collects subscriptions for porn sites records €3m profit
6 GoMo is being investigated by advertising authority
7 The Irish economy is thriving but if you’re not feeling it – here’s why
8 Hogan warns Britain on US trade deal as EU set to impose tariffs
9 Election adds to headaches for AIB boss Colin Hunt
10 I tried out deep fake app Doublicat. The results were terrifying
Real news has value SUBSCRIBE