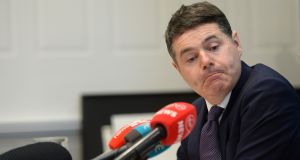 Tax revenues rose 5.7 per cent to €21.7 billion in the first five months of the year compared to the same period of 2018 but were €253 million below the Department of Finance’s target.

Exchequer returns for May show the first five months of the year saw a widening of the exchequer deficit to €62 million from €24 million at the same point in the previous year as total net voted expenditure rose 8 per cent to €20.8 billion.

Additionally, non-voted expenditure, which includes national debt repayments, rose 5.4 per cent to €4.8 billion as a result of a greater EU contribution on account of the Republic’s increased share of EU obligations and the timing of funds called up by the European Commission.

Davy chief economist Conall MacCoille said the corporate tax shortfall could be a timing issue. “Thankfully, Central Bank surplus income and spending inside generous Government targets have made up for the shortfall, with the items that feed into Ireland’s balance actually €178 million ahead of expectations,” he said.

“Next month will likely provide a clearer indication of the 2019 performance of this tax head,” the Department of Finance said.

Capital gains tax is up by €48 million so far this year at €211 million while capital acquisitions tax is up €8 million at €81 million.

Excise duty receipts, for taxes charged on motor fuel, tobacco and alcohol, were significantly up compared to 2018, coming in at €2.44 billion so far this year, a rise of 18 per cent. This was 6.2 per cent ahead of target.

As hotels and restaurants adapt to paying the higher 13.5 per cent VAT rate, after paying a reduced rate during the recession, receipts in this heading totalled €7.3 billion for the first five months of the year. This was almost 6 per cent ahead of 2018 but €112 million behind target.

An expected €275 million receipt from the Irish Banking Resolution Corporation (IBRC) also fell due to the State in May.

“Overall, May was a mixed bag for the exchequer,” said Grant Thornton tax partner Peter Vale. “Positive returns on the VAT and income tax front need to be balanced against an unexpected dip in corporate tax receipts. Given how in previous years corporate tax has provided a buffer against deficits elsewhere, there will be particular interest in the June corporate tax numbers,” he added.

The figures come after a strong set of labour force statistics issued earlier on Wednesday. According to data from the Central Statistics Office, the seasonally adjusted unemployment rate for May was 4.4 per cent, the lowest recorded since February 2005.