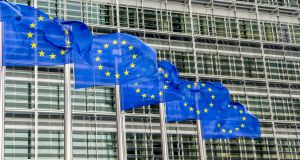 The State should broaden its tax base, continue to address aggressive tax planning, and focus investment on low carbon and energy transition, the European Commission said on Wednesday.

With strong growth in the Irish economy, and employment nearing a record low, the Government must use windfall gains to hasten the reduction of general debt and limit the scope of tax expenditures and broaden the tax base, the commission said.

Such action should be taken while the State continues to address features of the tax system that facilitate aggressive planning by companies, something that will likely be soon discussed at OECD level, it added.

“Ireland has further potential to improve the way its tax system can support environmental objectives. Such efforts could include reducing fossil fuel subsidies and providing a stronger price signal to investors by committing to a schedule of increases in the carbon tax over the next decade,” the commission said in its Spring Package recommendations for the Republic.

The commission went further than just suggesting that the State should move to reduce fossil fuel subsidies. It criticised Ireland for failing to “decouple” economic growth from greenhouse gas emissions. “Lack of progress in this area will make it more difficult for Ireland to meet its EU obligations, while also increasing the cost of future action,” it said.

Focusing investment on low carbon and energy transition, taking regional disparities into account, should be a priority, the commission said, although it admitted that the weak capacity of the construction sector could become an obstacle to the delivery of basic infrastructure investments in particular.

As with a recent report by the International Monetary Fund, the State’s healthcare system again came in for criticism. The commission described it as an “inefficient” system which “struggles to meet demand and does not deliver coordinated, integrated care”.

However, it viewed Sláintecare as being a credible vision for improving the service and making it more cost effective.

Another longer term issue that was highlighted was the continuing growth in the deficit in the public pension system, due to peak at 7.5 per cent of Gross Domestic Product in 2053. Pension reform plans, the commission said, need to be fully implemented.

Pierre Moscovici, commissioner for economic and financial affairs, taxation and customs, while not singling any country out, flagged the need to deal with taxation discrepancies across member states. “We also stress today the need for a number of member states to pursue and where necessary step up efforts to tackle aggressive tax planning, in the interests of fairness to all taxpayers,” he said.

The European Council will now be asked to endorse the commission’s recommendations and, following that, member states will be asked to implement them “fully and in a timely manner”.