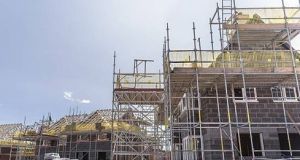 While housing output is beginning to pick up, it could be another four or five years before supply and demand come into balance. Photograph: Getty Images

When I first worked in the 1970s on forecasting the Irish economy we relied on a small number of CSO series, especially on trade, industrial output and retail sales. Together with a close perusal of the Farmers’ Journal, these sources offered key insights into what was going on in the real economy.

Today, in spite of a wealth of additional statistical series now available, the trade and industrial output data are of little use in understanding the economy given the distortions in the figures due to the complex global transactions of foreign multinationals. The quarterly Labour Force Survey is now the best guide to underlying trends in the Irish economy.

The latest Labour Force Survey, published on Tuesday, shows, contrary to my expectation that the slowdown in the wider EU and world economies would also dampen economic activity here, this hasn’t happened to date. Instead the latest employment figures show no deviation from the pattern of rapid growth over the last few years.

Average employment over the year ended March 2019 was up 3 per cent on the previous year, an identical growth rate to that for 2017 and 2018. Unless and until there is a hard Brexit it looks as if the Irish economy will continue to grow rapidly. However, a hard Brexit at Halloween could produce a dramatic change in that trend.

The latest data show that the current unemployment rate, at 4.6 per cent, is now back down to the average for the boom years 2000-2007. About two-thirds of this is short-term unemployment. Just 1.7 per cent of the labour force is out of work for the long term – not much higher than in the Celtic Tiger years.

While the economy is now virtually at full employment, this does not rule out continuing rapid growth for another year or two. The share of the population in the labour force could continue to rise through greater participation of women, higher employment of people with disabilities, and later retirement.

Inward migration, whether of those born elsewhere or returning emigrants, can also expand our potential workforce.

Over the last year our labour force grew by 63,000. Increased participation rates accounted for the biggest share of the increase at 27,000. The number of young people entering the workforce was larger than those retiring by around 18,000. And inward migration added around 18,000.

It is no surprise that participation rates have increased given that Irish rates are still low by EU standards.

The CSO also publishes figures of the number of people who are currently economically inactive and not actively seeking work, but who might take a job if a suitable opportunity arose. A lot of these people are women who might be persuaded back to work if the conditions offered were sufficiently attractive. They include many with high levels of education who would be very employable in today’s job market.

In the last year participation rates among women aged over 45 rose by two percentage points, a significant increase. Nevertheless, participation rates of women in this age group remain below the average of the EU-15, and even further below rates in other northern European economies.

Another factor which may explain a discrepancy between rates of growth in employment of younger and of older women could be differences in their housing situations.

Older women are more likely to be a number of years into a mortgage, and insulated from the vagaries of the rental market. On the other hand, some younger women may find it prohibitively expensive to live in Dublin where the major growth in job opportunities have been.

Equally, the high cost of housing can be a deterrent to inward migration, whether of returning emigrants or new arrivals.

While housing output is beginning to pick up, it could be another four or five years before supply and demand come into balance. This means that Ireland will continue to be a very expensive place to work for those who do not already have accommodation. Pay rates will need to be high enough to make it worthwhile relocating here.

Employers who want to expand their workforce will need to make it attractive in order to draw in untapped sources of labour. Inclusive workplaces – those that are family-friendly, those that accommodate workers with disabilities, those who welcome immigrants – along with those who pay well will have the edge in attracting talent.