Inflation rises to 0.4% on foot of stronger oil prices 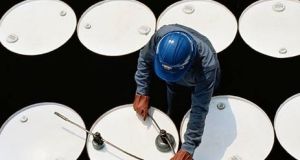 The most significant monthly change affecting the Irish CPI was an increase in the cost of transport, reflecting higher oil prices internationally. Photograph: Getty Images

Inflationary pressure in the Irish economy remains weak, with the latest Consumer Price Index (CPI) showing prices nationally rose by just 0.4 per cent in the year to May.

However, this represents an acceleration on the previous month when annual price growth was recorded at -0.1 per cent, and most likely reflects the impact of stronger oil prices.

A similar advance was seen in euro zone inflation, which jumped to 1.9 per cent in May.

The European Central Bank will debate next week whether to end its long-standing stimulus programme later this year ahead of possible interest rate rises next year. The ECB’s chief economist, Peter Praet, suggested this week that the ECB was pleased with the rise in inflation, raising the possibility that a decision may come sooner rather than later.

While policymakers are in broad agreement that the purchases should end this year, ECB president Mario Draghi has avoided any formal discussion about winding down the programme, looking for more evidence that inflation is on a sustained rebound.

The other main driver of inflation were increases in the cost of hotels and restaurants (+0.9 per cent).

Conversely, there were decreases in miscellaneous goods and services (-0.1 per cent), which includes health insurance premiums and the cost of personal care products.

The average cost of motor insurance in the Republic fell 9.3 per cent year-on-year in May, the latest numbers show.

“Despite strong Irish economic growth, there is little sign of sustained pressure on the prices front, which appears to be the same story across the euro zone, suggesting that the ECB will be in no hurry to increase interest rates,” Merrion analyst Alan McQuaid said.

“Although the annual inflation rate should pick up in the coming months, inflationary pressures in Ireland as measured by the headline consumer price index are in general likely to stay well contained for the immediate future.

“Oil prices will be critical in determining the headline inflation outlook over the next 12 months or so, but they remain volatile and hard to predict given the uncertainty over Opec supply and geopolitical tensions in the Middle East.”

1 Will your boss let you work long-term from home – or from abroad?
2 Plans for €2bn Dart expansion lure Bombardier to Dublin
3 McGuinness faces Brexit and Covid grilling at parliamentary hearing
4 Subway bread too sweet for the Irish tax authorities
5 City firms move £1.2tn and 7,500 jobs out of London - EY
6 Ryanair signals possible closure of Cork and Shannon airport bases
7 Not just another brick in the wall
8 Google tells workers to return to country where they are employed
9 Virgin Media unveils new entertainment platform
10 There may be trouble ahead for the housing market
Real news has value SUBSCRIBE