They don’t come more American than Harleys, jeans and bourbon 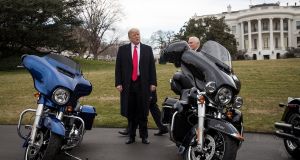 It’s hard not to chuckle at the three US products Europe chose to slap retaliatory trade tariffs on in its trade war with the US – Harley-Davidson motorbikes, Levi jeans and bourbon whiskey. Can you think of three items that better capture the image of rugged America? They practically shout... USA! USA!

It’s obvious this is a personal dig at Trump and other US leaders – bourbon comes from Kentucky which is the home state of Senate majority leader Mike McConnell – rather than a serious attack on US trade.

The numbers speak for themselves. The value of US trade being targeted by Brussels comes to about $3.3 billion (€2.8bn), while EU steel exports to the US last year were valued at $6.5 billion. The disparity suggests the EU’s retaliation is more of a gesture designed to keep face while minimising the prospect of an escalation.

Canada was considerably more aggressive in its response, imposing its own tariffs of up to 25 per cent on a list of US imports worth up to $16.6 billion Canadian dollars (€11bn).

A clearly exasperated Canadian prime minister Justin Trudeau called Trump’s move an affront to the long-standing security partnership between Canada and the US.

Will Trump be emboldened to up the ante or will he back down? Precedence is no guide. Were he to strike at Europe’s automotive industry, which exports €27 billion in cars each year to the US, we’d really have an explosive situation.

Trump has been obsessive about the number of German cars in the US. He reportedly told French president Emmanuel Macron recently that he wanted to prevent Mercedes models from rolling down New York’s Fifth Avenue. However, the property mogul-come-president’s tactic is usually to punch first and negotiate later, so maybe a climbdown is more likely.