Is Ireland in danger of creating another housing bubble? 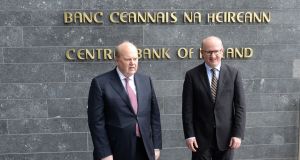 Minister for Finance Michael Noonan with governor of the Central Bank Philip R Lane. Are they right to dismiss the warnings of impending property bubble? Photograph: Dara Mac Dónaill

On the way down, we convinced ourselves it wasn’t happening, or at least most of us did.

Warnings about the unsustainable nature of the Irish housing market went unheeded or were countered with guff about soft landings and demographic imperatives.

The naysayers, that minority of bankers, investors and economists who raised a red flag, were painted as cranks; contrarians; those who got in the way of business.

Now that we’ve been burnt – our financial folly ruthlessly exposed – perhaps we’ll be more amenable to the warnings this time around.

On Wednesday, the Fiscal Advisory Council cautioned that a leap in construction to address “pent-up demand” in the housing market could overheat the economy, bidding up prices and wages, and undermining competitiveness in a throwback to the mid 2000s.

The OECD then upped the ante by warning, as it famously did in 2006, that the Irish economy was already overheating, and that the sharp rise in house prices and property-related lending raised the prospect of “another bubble”.

The official property price figures, released on the same day, did little to allay concerns, with property price inflation put at a two-year high of 10.5 per cent.

Minister for Finance Michael Noonan and Central Bank governor Philip Lane have been at pains to point out that the current acceleration in prices is primarily a function of a strongly growing economy and a persistent supply shortage, which will ultimately correct in time.

But are they right to dismiss the warnings of impending property bubble?

In many people’s eyes, a bubble is a credit-fuelled event that drives asset values above their fundamental level. However, you can have a period of excessive speculation without the credit component. The dot.com bubble in the US in the 1990s, for instance, saw a rapid rise in equity markets fuelled by investments in internet firms.

Regardless of where the Irish market is headed, John McCartney, director of research at estate agency Savills, believes the two biggest problems of the last decade will be avoided.

He also doesn’t believe that this period of very rapid house price growth will be followed by a crash either. “I think it’s just going to be a glide path to slower, more sustainable growth.”

That said, McCartney says the Irish property market is dysfunctional and that the current spate of double-digit inflation is being driven by a combination of chronic supply shortages and cash-buying investors, who are not beholden to the Central Bank’s lending restrictions.

Dublin’s population increased by 22,000 last year, resulting in 8,000 new households being formed but according to official figures only 4,200 new housing units were built, and even these figures are likely to overstate the true level of building because they are based on ESB connections.

Last year, average rents rose by 13.5 per cent, way over the Government’s 4 per cent rental cap, while gross yields on residential real estate are estimated to be between 5.5 per cent and 8 per cent in Dublin. With bank deposit rates at barely 1 per cent, the returns from property speculation are considerable.

McCartney seems to suggest that the investor element has created a perfect loop of self-perpetuating prices.

“You can have all the mortgage rules in the world, but if cash investors are driving the market, you can’t control prices.”

In his view, there are a number of negatives that go with this level of house price inflation.

“If housing costs get too high, we’re likely to see a return to urban sprawl and commuter culture as more families move outside the cities in search of living space,” he says, which reduces their quality of life and places greater pressure on public services.

With rising prices “you also get a higher proportion of disposable income spent on housing which reduces the circulation of money through the economy”.

However, the biggest negative, he says, is the upward pressure on wages, which is already beginning to pulse through the economy.

So while we’re not in another credit-fuelled bubble, according to McCartney, we’re beginning to experience some of the same issues that undid us last time around.

Davy analyst Conall MacCoille says asset prices can be undervalued or overvalued but “where it becomes a problem for the economy is when it is driven by debt”.

He says if the Central Bank rules are adhered to, they’ll stop people taking out loans that could fuel another bubble.

The Central Bank’s recent review of the rules elicited a lot of submissions criticising the severity of its loan-to-income (LTI) rule, which limits people to borrowing 3.5 times their income. This is stricter than in the UK, where the equivalent is 4.5 times.

MacCoille believes the bank is likely to come under pressure to loosen this requirement if prices keep rising at current rates.

“I’d say the next battle will be people campaigning for higher loan-to-income multiples when they eventually start to hold back prices.”

He notes that the median loan-to-income multiple for first-time borrowers here is 2.9 compared to 3.4 in the UK.

“So there’s probably a bit of room for house price inflation before the rules, as they currently stand, become a constraint and start to hold back prices.

“The people who are taking out loans, I don’t think they are overleveraged, but there’s a question of house prices themselves and whether they are too high.”

MacCoille believes that some of the current volatility is a function of the low level of transactions, which are still way below what constitutes a normal, functioning market.

“When you have a very illiquid market you can get volatile movements in price.

“On the question of whether we’re in a bubble, the jury is out, but probably the answer is nom nonetheless, when you see the lack of housing supply and when you see leverage increasing, these are things that create them,” MacCoille says.

For Dublin architect and property expert Mel Reynolds, the focus should be on affordability.

He says the average purchase price of a house in Dublin is now roughly €400,000, which requires a household income, combined or otherwise, of at least €100,000 under the new mortgage rules.

“So that would suggest many people on average incomes are being priced out of the market,” he says.

This is putting pressure on people at the bottom of the ladder to borrow more. Notwithstanding the Central Bank’s rules, Reynolds believes this could be where the current trend tips over into a bubble.

“If you’re buying something and taking out levels of debt that fundamentally you can’t afford, that’s a red light. It means we’re entering into an unsustainable phase.”

He believes, like MacCoille, that political pressure will be exerted on the Central Bank to loosen its loan-to-income rule.

“All the demand drivers for prices to go up are in place, and it shouldn’t be a surprise to anybody that prices are going up at this rate,” Reynolds says.

He is critical of the what he describes as the Government’s pro-cyclical policy response to the crisis – the tax rebate for first-time buyers – which he claims is simply fanning demand in the absence of supply.

Like the other analysts, he stops short of applying the bubble tag to the current housing market but wonders if it might not apply to land speculation, particularly in Dublin.

The mass sell-off of land after the crash, combined with generous tax breaks, saw land speculators flood the market in the pre-2015 period, he says.

“Incentivised to hold on for seven years, they can crystalise any capital gain in 2022 tax free, saving 33 per cent in tax in the process.

If prices increase at current rates, land prices will double over the next three years, Reynolds says.

Regardless of whether we have a housing bubble or not, or whether we’re approaching another bubble or not, residential property seems destined to play a central role in the future economic trajectory of this country.