Groundhog Day beckons for economy in danger of overheating 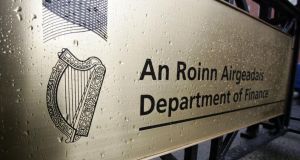 The Department of Finance is forecasting growth of 4.3 per cent this year, whereas the ESRI and the Central Bank suggest growth of 3.5 per cent to 4 per cent. Photograph: Frank Miller

Governments generally hope and pray for higher growth to unleash additional resources to improve public services or cut taxes. However, wise governments should take care when rapid growth is sustained over a period of years. As we learned to our cost from the boom years, too much growth can be bad for you. In the tale of the tortoise and the hare, the tortoise, through slow and steady progress, won the race.

The report by the Irish Fiscal Advisory Council, published on Wednesday, provides important, though difficult, advice for the Government.

Economic forecasting at any time is uncertain but today, because of problems with the national accounts, we are effectively flying without instruments. Nonetheless, there are some key measures that provide guidance, in particular the employment and unemployment numbers.

On a full-time equivalent basis, employment was 4.4 per cent higher in the first quarter of this year compared with last year. With productivity running at 1.5 per cent, this would translate into a 6 per cent growth rate in output this year – very similar to the fiscal advisory council’s forecast of 5.7 per cent.

The Department of Finance is forecasting growth of 4.3 per cent this year. (By contrast the ESRI and the Central Bank suggest growth of between 3.5 per cent and 4 per cent, which seems inconsistent with the relevant indicators.)

Under other circumstances, underestimating growth may appear conservative and “safe”. The bias towards considering only the risk of underperformance on growth is a legacy of the crisis. However, when the economy is growing more rapidly than its underlying capacity, there are also significant dangers. In the period 2003 to 2007, the failure of the authorities to heed warnings about the economy growing too rapidly led to disaster.

While much of our attention is focused on the gloomy prospect of Brexit, it may be some years before the downside hits. In the meantime, over the next two years, if the Government is successful in tackling the housing crisis, that success will add at least another 1 per cent a year to growth.

If this were to happen, unless Brexit “saves the day” by slowing the economy, we could face a repeat of the 2003-2008 period when the economy suffered from serious overheating.

It now looks likely that full-employment will be achieved by the end of next year. With the ECB running a monetary policy that is too expansionary for the Irish (and the German) economies, it is up to the Government to adopt a prudent fiscal policy. With this in mind the council recommends that the Government should run what might be termed a neutral budget for 2018: it should neither significantly increase real expenditure nor cut taxes.

The problem faced in the 2003-2007 period was that the economy was already growing very rapidly and the building boom was superimposed on this success. However, the economy had the ability to produce only so much goods and services.

The consequence of trying to do too much was a serious bout of inflation in domestic costs, including housing costs. Also, because we could not produce enough to meet our consumption and investment demand there was a surge in imports funded by foreign borrowing.

If the then government had wanted to prioritise investment in infrastructure, it would have needed to reduce other domestic demand by raising taxes or cutting expenditure. However, the government did not accept that this was necessary, and the consequences are history.

Today, the Government again wants to prioritise investment in infrastructure, especially housing. However, the economy is now hitting its capacity to produce goods and services. This means that, to make space for the necessary infrastructural investment, consumption and investment elsewhere needs to be reined in.

The required tightening of fiscal policy would not be due to concerns about our indebtedness. The suggestion that the proceeds of the sale of AIB shares should be used to fund investment is misplaced. Given the effects of the crisis years on public services, the need to reduce demand in the economy to make space for investment is best done by raising taxes to reduce consumption, rather than cutting Government expenditure.

Hopefully we will not repeat the mistakes of the past over the period to 2020, and the fiscal council’s report should provide a wake-up call. The need to tighten fiscal policy poses very difficult problems for the Government in the coming budget. If indicators of growth continue to be strong up to September, it may appropriate to raise taxes next year – a real challenge to the current Oireachtas.