What May’s failed gamble means for the Irish economy

Cliff Taylor: We are deep into the realm of unknown unknowns about Brexit

With a €3 billion AIB flotation on the horizon Ireland's economy could yet be impacted by the shock UK election result. 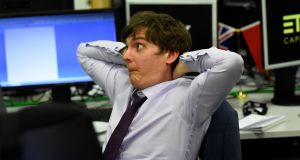 Market uncertainty: traders will take their direction from political developments that could take some time to unfold, but some volatile moves are possible. Photograph: Clodagh Kilcoyne/Reuters

The key impact of the UK general election on the Irish economy was always going to be what the result meant for the Brexit talks.

The political upheaval it has led to means there is even more uncertainty about the British government’s approach to negotiations due to start in 10 days, on June 19th. We are into the realm of unknown unknowns.

Ireland will hope that what emerges is a less damaging version of Brexit. But there could be chaos as the talks get under way with a potentially weak and uncertain UK government. Until the dust settles, who knows?

The immediate impact on the markets was some weakening in the value of sterling, but, like the rest of us, market analysts are trying to work out what on earth this is going to mean. We don’t even know if a government will be in place for the European Union to talk to.

For Ireland, the harder the Brexit the greater the risk to our economy. Before and during the general-election campaign Theresa May had indicated a version of Brexit that would be damaging from an Irish viewpoint, involving the United Kingdom leaving the customs unions and the single market.

This would create the need for customs barriers and potentially lead to tariffs – special taxes on trade between, in this case, the UK and the EU – which would harm trade between the UK and Ireland.

The dialling-up of rhetoric between London and the EU highlighted the threat of a complete breakdown in the negotiations and the UK leaving the union without a deal, which would be the worst possible outcome for Ireland.

Now that the UK electorate has refused to give May the increased majority she sought, the questions are these: have they rejected her hard-Brexit strategy, and what does this mean for the talks?

That the prime minister refused repeatedly to outline during the campaign what her Brexit strategy was complicates the political calculus even further.

The immediate market reaction has been interesting. Sterling dropped 2 per cent when the exit poll was announced, at 10pm on Thursday, but avoided the overnight collapse seen on the night of the Brexit referendum, a year ago. After a bit of an overnight rally, on Friday morning it is about 2 per cent weaker again, at more than 88p to the euro – approaching danger levels for many Irish exporters to the UK.

Sterling is now a prisoner to political developments, falling again this morning on reports that May would not step down. Some early commentary by market analysts suggests that hopes for a softer Brexit have given the currency some level of support. But views are divided. Others feel the currency and more risky assets are now vulnerable, given the political uncertainty and the risk that a weak UK government could lurch towards a hard Brexit.

The value of sterling is the immediate route through which the election results will have an immediate economic impact here. Traders will take their direction from political developments that could take some time to unfold, but some volatile moves are possible. After the big slide in the middle of last year sterling has traded generally between 84p to 87p against the euro this year. Exporters will hope it will not drop back above 90p.

Even more important will be the eventual shape of Brexit.

The Economic and Social Research Institute has estimated that a relatively hard Brexit could knock almost a percentage point off our growth rate in the few years after it happened. But there is significant uncertainty about the exact impact and its timing, given the unprecedented nature of what is at stake.

Now added to this is how the political drama will play out and its impact on the talks. Voters appear to have rejected a hard Brexit, although that does not necessarily mean it will not happen. What will the presence of the DUP supporting the next UK government mean? The DUP wants a “frictionless” Irish Border - but they appear to support Britain leaving the customs union and they certainly won’t want any “special status” for the North, fearing it could be a step closer to Irish unity. How all these goals can be acheived together is far from clear..

Or will a weak government require a new election just as the Brexit talks reach a crunch, later this year, throwing the whole process into chaos? Almost a year after the Brexit vote it is still all to play for.