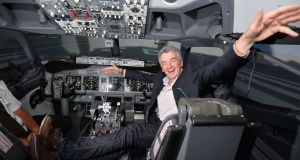 Ryanair chief executive Michael O’Leary has sold off 4 million shares in Ryanair at a price of €18 each. Photograph: Alan Betson / The Irish Times

Ryanair chief executive Michael O’Leary has sold off a significant volume of his shares in the Irish airline.

Mr O’Leary disposed of four million shares on Friday, June 2nd, according to a disclosure released to the Irish Stock Exchange.

Each share was sold for €18 by Mr O’Leary, meaning he gained around €72 million from the transaction.

At the end of May Ryanair announced that profits grew after tax by 6 per cent to €1.316 billion in the 12 months to March 31st and it announced plans to return €600 million to investors through a share buy-back scheme.

Last week, both Citigroup and UBS downgraded Ryanair from a ‘buy’ rating to ‘neutral’. According to UBS, the airline is the best-of-breed short-haul operator in Europe, but it now sees a balanced risk and reward and therefore downgraded the stock.