Who will be Leo Varadkar’s Minister for Finance? 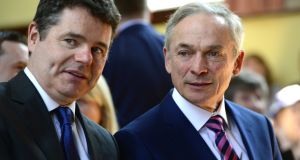 The office of the minister for finance is the most coveted position in any government and arguably a more important role than that of the taoiseach.

It is unclear what Leo Varadkar’s ambitions are for the department. He has floated the prospect of merging the department of public expenditure and reform with finance. There is also speculation that he will appoint one minister to oversee the two departments, assisted by two ministers of state.

The shape of the department will determine its occupant. If there is only one department, the most likely incumbent will be the current Minister for Public Expenditure and Reform, Paschal Donohoe.

However, if the incoming taoiseach leaves the two departments intact, Minister for Education Richard Bruton may win the prize of finance, something that eluded him under Enda Kenny’s tenure.

As finance spokesman for Fine Gael from 2002 to 2010, Mr Bruton was destined for Merrion Street until his failed heave against Enda Kenny in 2010 ensured his relegation.

It was he who proposed splitting the department of finance in two. In a document authored by Mr Bruton in 2010, Fine Gael argued for an Office of Public Spending and Modernisation to be established.

The idea at that point was that the department of finance had failed. It had allowed systemic risks in the economy to build up and had an excessive breadth of responsibilities. Mr Bruton’s position has not changed over the past six years.

Mr Donohoe, meanwhile, has effectively been doing two jobs for the past 18 months. As Michael Noonan’s health deteriorated, the Dublin Central TD was tasked with assisting the Minister for Finance, as well as doing his day job.

Both men are well qualified for the role. Mr Bruton is an economist, who studied at Oxford University. The Dublin Bay North TD’s thesis at Oxford was on the subject of Irish public debt.

Mr Donohoe has a first class honours degree in politics and economics from Trinity College. He spent a decade working as a sales director for Procter & Gamble in the UK before devoting his career to politics.

Politically, Mr Varadkar is in a bind. Both men were hugely influential in his success in the Fine Gael leadership contest. Paschal Donohoe was seen as the kingmaker, but Richard Bruton was a huge coup. Hours into the campaign, Mr Bruton confirmed he would not contest the position and would be supporting Mr Varadkar.

Mr Bruton called the two candidates to inform them of his decision. He managed to get in touch only with Simon Coveney. A reporter broke the news to Leo Varadkar at the end of the meeting. He was surprised to learn of Mr Bruton’s early declaration, although not stunned by his support.

In a way, Mr Bruton’s support was a game-changer for Mr Varadkar. It allowed reluctant others to declare for Leo Varadkar.

A day later Mr Donohoe confirmed the worst kept secret in politics. He was backing Mr Varadkar. This was a position he had made clear to his younger colleague a number of weeks beforehand.

Paschal Donohoe is highly influential in the party. His support was vital for Mr Varadkar.

Michael Noonan leaves the Department of Finance and the economy in a much more secure position than he found it in. However, the problems Fine Gael identified in 2010 remain.

The Department of Finance, it said then, was too big and unfit for purpose. If merged with the Department of Public Expenditure (DPER) again, it may be too hefty for one minister and could leave the Government exposed.

It may also be argued that income and expenditure should not be in separate government departments.

Leo Varadkar, meanwhile, is left with the almost impossible choice of dividing or uniting the departments, and his supporters.

Previous experience: Honours in politics and economics; sales director with Procter & Gamble; minister of state at the department for European affairs 2013-2014; minister for transport 2014-2016; Minister for Public Expenditure and Reform 2016 to date