Chris Johns: Theresa May proves obvious second-rate credentials in face of her demise 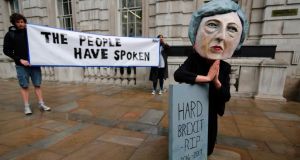 Theresa May: “Her decision to treat with contempt the 48 per cent of the electorate who voted against Brexit spectacularly backfired.” Photograph: AFP

Another shock poll result and, like the Brexit referendum outcome, the search for simple explanations is an exercise in futility. It’s complicated. But keen observers of the UK political landscape noted throughout the general election campaign how Theresa May acted and sounded like a loser: the Conservatives’ tactics were spectacularly and mystifyingly inept. All through the campaign, May’s demeanour pointed to anything but a winning mentality. She was nervous, uncertain and stuck to her now infamous soundbites at a time when the the electorate was, for once, hungry for both detail and change. Her platform - ‘’sound and stable leadership” and “no deal [on Brexit] is better than a bad deal” - simply failed to resonate.

Two dogs failed to bark during seven dismal weeks of the most mediocre electioneering that most of us can recall. Brexit was hardly mentioned by any candidate: the most plausible explanation is that the British people, including most of its politicians, have finally realised what they have done. The penny has dropped: it is going to be a fiendishly difficult exercise with a highly uncertain, but probably disastrous, outcome. A vista too awful to contemplate so they stopped looking at it. If the electorate’s gaze was averted from Europe it was fixed firmly on an agenda set by Jeremy Corbyn. He promised a rise in corporate taxation and income taxes on higher earners that would fund a raft of increases in welfare and other forms of government spending. Don’t take my word for it: the respected and independent Institute for Fiscal Studies repeatedly pointed out that neither the Tory nor the Labour manifestos added up.

And that was the second quiet dog: the economy.

The aftershocks of the Great Financial Crisis still reverberate. The economy has grown fitfully, unemployment is low but living standards have failed to pick up; housing costs are still absurd in the South East of England and elsewhere. Corbyn provided uncosted and vague hope while the Tories shrugged with promises of more of the same. Everybody knows the NHS is in financial trouble and that the only practical way to fund exploding care costs for the elderly will be via the money locked up in their houses. The Tory manifesto debacle involved pointing this out and then immediately backtracked when the owners of those houses objected. Economic policy has rarely been so peripheral to a general election.

Nobody believed the Tory manifesto’s promises on immigration: they are the same commitments as before and have never been met, particularly when Theresa May was in charge of them at the Home Office. Business lobbies and the NHS keep asking where their needed workers are going to come from if immigration is to be slashed. As with Brexit and so much else there were no details: the Tories just airily promised to reduce immigration to a trickle. Fittingly, the manifesto’s author lost his seat. When the UK education system was more rounded, every schoolchild used to learn from history that the label ‘Tory’ was originally coined as a term of abuse.

Theresa May will now try to form a minority government. An obviously second rate politician with the clock already ticking towards her demise. Another general election this year is a distinct possibility. Brexit negotiations will begin immediately and she will be sitting at a table where her opposite numbers, refreshingly crystal clear about their objectives, will sniff only weakness and uncertainty. The mandate for the infamous hard Brexit has failed to materialise but nobody knows what the British people have asked her to deliver. It is perfectly possible that she has no idea either. Her decision to treat with contempt the 48 per cent of the electorate who voted against Brexit spectacularly backfired. I’m willing to bet that a significant proportion of them tactically voted Labour, not because Corbyn has anything coherent to say on Brexit but quite possibly because they recognise there is now nothing good, or indeed coherent, that can be said about the decision to leave the EU.

It is often said that markets hate uncertainty so there may be some surprise that both sterling and UK equities look, so far, to have reacted relatively quietly. The truth is that markets hate extremism far more than they loathe uncertainty: there is now a real chance that hard Brexit is now off the table and that while the future is unknowable, whatever emerges may not be quite so catastrophic, quite so extreme, as the outcome that May promised the British - but one she so obviously did not believe in. The British may well have the politicians they deserve but they may be entitled to wonder just what they did that was so awful that resulted in the current generation of second-rate leaders.