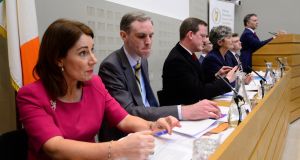 Members of the PAC chaired by Sean Fleming, from left Josepha Madigan Shane Cassells, Alan Farrell and Catherine Connolly on the examination of the NAMA sale of Project Eagle. Photograph: Cyril Byrne

The Committee of Public Accounts (PAC) report into the Project Eagle sale process generated plenty of noise on Monday as the Oireachtas public spending watchdog issued a number of negative findings against Nama for failings when selling its Northern Ireland assets in 2014.

The report also set out some of the detail behind the original lending decisions by Anglo Irish Bank, AIB, Bank of Ireland and Irish Nationwide Building Society that is worth recounting.

Nama valued the loans for acquisition using a methodology agreed with the European Commission. This involved a discount of €2.75 billion being applied to the borrowings, a cost borne largely by taxpayers but also by shareholders in the banks.

A hefty discount of 86 per cent was applied to the loans extended by INBS with the result that they were valued at just €20 million.

The disposal of Project Eagle to Cerberus generated just more than €1.43 billion, giving rise to a total loss incurred by Nama of €800 million, including a large impairment charge.

Earlier disposals amounted to €590 million, to bring Nama’s total proceeds from its Northern Ireland debtors to €2.02 billion. This amounted to just 36 per cent of the original value of the loans, or combined losses of €3.55 billion.

It’s a stark reminder of the vanity of Irish bankers and property developers during the boom, which has cost taxpayers dearly.